Above the Clouds Proposal in Maui | Dante + Cheryl 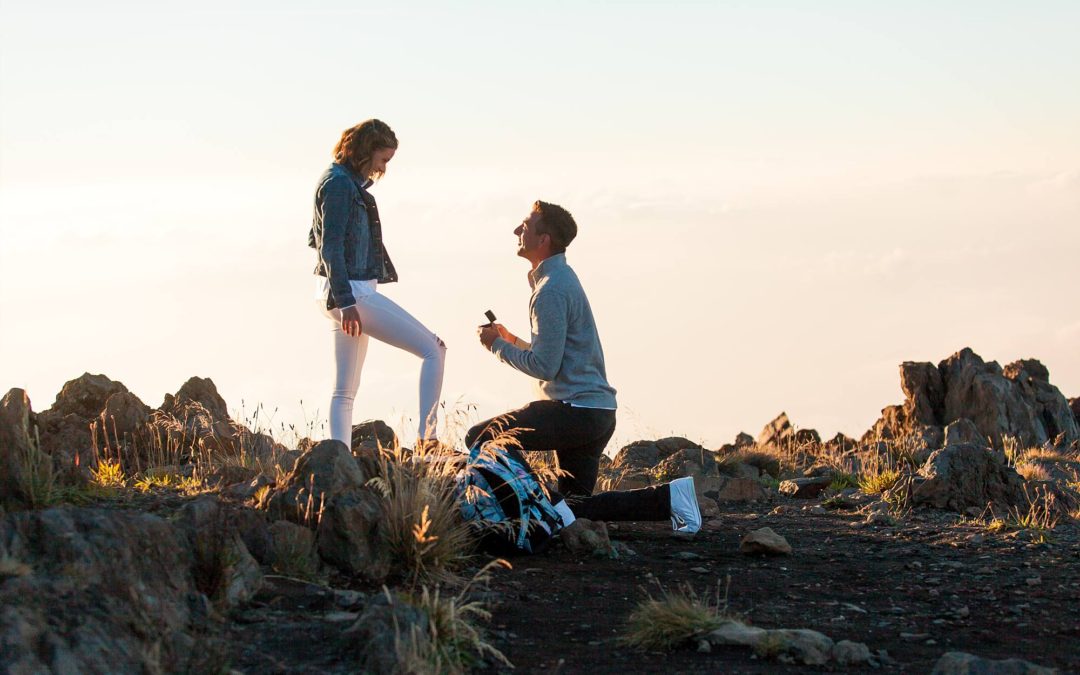 Above the Clouds Proposal in Maui

When we heard about Cheryl’s background, we knew she was going to be crazy about Dante’s proposal!  Cheryl is an awesome Meteorologist in Chicago.  (She has quite an Instagram following, so she’s worth checking out HERE.  And HERE is her ABC 7 Eyewitness News Bio to check out!) Dante really wanted to have an above the clouds proposal in Maui because she’s a meteorologist and you know how they get about clouds and the sky and weather and all that good stuff.  That’s kind of her jam. So, to the top of Haleakala we went!

We could sit here and tell you all about how it happened…but who better to tell the story than Dante himself!

“Slow down! You’re going to drive off the road!”

They were on their way to the peak of Mount Haleakala, a dormant volcano on the east side of the island. Ascending it was no easy task. Even by four-wheel drive, and perfect weather conditions. Plus, Dante had something special planned set to coincide with the remarkable sunsets on the Mount that they couldn’t be late for. A plan a year in the works to propose to the love of his life, Cheryl.

Let’s back up a bit…

10 months earlier, in October, Cheryl and Dante set their sites on visiting Hawaii in December. Neither had been, but both knew very well of its enchanting landscapes. Dante decided this would be the place, and time, to pop the question.

He actually decided to propose about 2 years earlier, when Cheryl had taken him on a magical Ferris Wheel ride followed by a not so magical ride on the swings at Navy Pier in Chicago. Where the two live.

But now he had a set date and place he could start planning for. Nothing would get in his way!

He began seeking out places and people to make the occasion special.

Through some amazing friends in the event planning business he was referred to Engaged on Maui- a one stop shop for planning and capturing the special moment.

He spoke directly with Fawn and coordinated a breathtaking proposal for Haleakala National Park summit during sunset on the third night of their trip.

The heat was on and the clock was officially counting down. All they needed to do was get to Hawaii in December.

About ten days before their trip Cheryl came to Dante with some unsettling news.

“It looks like Hawaii is in the path of a tropical storm.”

She would know – she’s a meteorologist!

Cheryl, being one of the country’s top meteorologist’s tended to know these kinds of things.

“You have got to be kidding me.” (or something like that) Dante replied. Praying deep down the weather would cooperate.

It would not however, and the couple was forced to audible their plans the week of the Hawaii trip due to the torrent storm and instead go to Costa Rica.

Dante had no knowledge of Costa Rica, or contacts, so he went back and forth on popping the question there. Ultimately, he decided against it, and waited until the couple could reschedule for Hawaii.

One of the first memories Dante had of discussing marriage with Cheryl was her emphasizing how important the proposal was to her. She is very low maintenance and easy-going, but she made it clear her proposal needed to be special. Which was music to Dante’s ears, as he loves to go over the top on just about everything.

So just winging it in Costa Rica was out of the question.

Dante urged Cheryl to rebook Hawaii asap. They settled on early July of that year, 2018.

For the next six months Dante had to continue to hide the engagement ring from Cheryl and try to not over-think his plan.

Fawn was amazing at rescheduling and coordinating everything with Dante. The two of them figured out that Sunday night, July 8th, would be ideal for the proposal. Fewer people on the mountain, and Dante was able to score a hard to get reservation at Mama’s Fish House so they could celebrate there afterwards.

Fawn ran a couple of her best photographers and videographers by Dante for approval. After seeing their past work he quickly agreed. Together, they planned out a perfectly timed sunset arrival for Dante and Cheryl at the parking lot just before the summit, which would provide the best chance at privacy. Engaged on Maui’s photographer and videographer would be setup there already, disguised as tourists taking in the sights off to the backside of the landing.

The plan was foolproof!

Or so they thought.

After arriving on Maui, taking in the local customs, scenery, and wildlife for a few days, Sunday was approaching. Dante had reached out to Cheryl’s oldest brother, Kevin, for approval and was given the green light. At the time, he thought he was more nervous about asking him than he would be asking Cheryl. (He was wrong).

On Saturday Dante and Fawn covertly spoke on the phone without Cheryl knowing and went over the final plan for the 100th, and hopefully last time. They both checked the weather that night and things looked to be shaping up to be another beautiful day.

Sunday morning arrived and the weather was gorgeous as it had been all week.

The couple started the day with a nice walk along the shoreline before breakfast with plans to hit the beach for a few hours before trekking up to “explore” Mount Haleakala around sunset. Dante recalls not being able to believe the day had finally come as they lay on the beach late morning through lunch. Around lunchtime Dante checked his phone and nearly had a heart attack.

Weather can sometimes be finicky on Haleakala

There was a text from Fawn telling him to check his weather apps and the National Park’s website because it looked like a bad storm was moving in on the volcano summit.

Cheryl was just as excited as Dante to make the trek up to the summit, not knowing what was in store for her. But she became perturbed when Dante began asking her for weather updates relating to the mountaintop every 10 or 15 minutes.

“Why do you keep asking about the weather up there?”

“Just look at the clouds all moving in over there, you can tell without a radar it’s going to be bad up there.”

“We don’t have to go tonight, let’s just go later in the week.”

Dante thought to himself this couldn’t be happening again. The weather!

For the next 5 hours Dante and Fawn snuck phone calls, texts, and group emails with the photographer and videographer trying to decide whether to chance it and stick to that evening, or move it once again.

We had to reschedule.

The only night the photographer and videographer were available was the following night, Monday. They decided to roll the dice and plan for the next day as Dante sweated bullets through what was supposed to be the happiest celebratory dinner the couple ever had at Mama’s Fish House.

That night while laying in bed Dante refreshed the webcam stationed on Mount Haleakala hoping for a sign of good weather the next day. Cheryl continued to question why he was so concerned with the weather all of a sudden.

Monday came and with it brought beautiful weather once again. But Dante was weary. He remained nervous the entire day.

Which may have explained his led-foot in the Jeep racing up the winding two lane “highway” to Haleakala’s peak.

The turbulent car ride did not please Cheryl. But they couldn’t be late and miss the sunset.

Upon finally arriving (safely) at the lookout spot Dante was relieved to see that Cheryl and he were the only people there. Aside from two “tourists” with professional photo equipment off by themselves taking in the majestic backdrop.

Breathtaking doesn’t do justice to the view from above the clouds with the sun making it’s slow departure, dipping behind them, casting a kaleidoscope of pinks, oranges, and pastels as far as the eye could see. This was definitely the right spot to ask the girl of his dreams, who had been obsessed with weather since she was a little girl, to spend the rest of her life with him.

As the couple looked out over the chain of islands dotting the Pacific ocean, and Dante ran through his gameplan trying to muster up the courage he suddenly needed, they heard rocks crunch to their left.

As they looked over towards the parking lot, a Church van was pulling in. It parked, and out exited about 12 tourists from Japan. Not only were they not alone anymore, but they all had high-end cameras around their necks. Which to Dante meant having to figure out a way to find a private spot now, and quick, or to photoshop them out of the pictures and video after.

Luck shined on him though and the tour group had a feeling a proposal was about to take place. Apparently, it was evident to everybody on the mountain that evening except for Cheryl, as the tour group stayed to the back and as Dante descended to one knee the photographer and videographer scrambled into place while recording.

Cheryl had no idea what was happening and in a confused state, just said “no” as Dante began to talk. Dante was caught off guard so stopped, to which Cheryl then told him “no go on.”

He began again, mind blacked out with emotion.

She said yes to spending the rest of her life with him and making him the happiest man in the world.

Cheryl claimed she was totally, absolutely surprised, but by the looks of Dante’s face in the pictures it looks like he was more so.

The pictures of the two, set against the backdrop of the Maui sunset from up above the clouds look surreal. A work of CGI.

In the end, the weather cooperated, the meteorologist got her special proposal, the luckiest guy in the world got the girl of his dreams and Engaged on Maui captured it all perfectly on video and in photos. I couldn’t be happier! 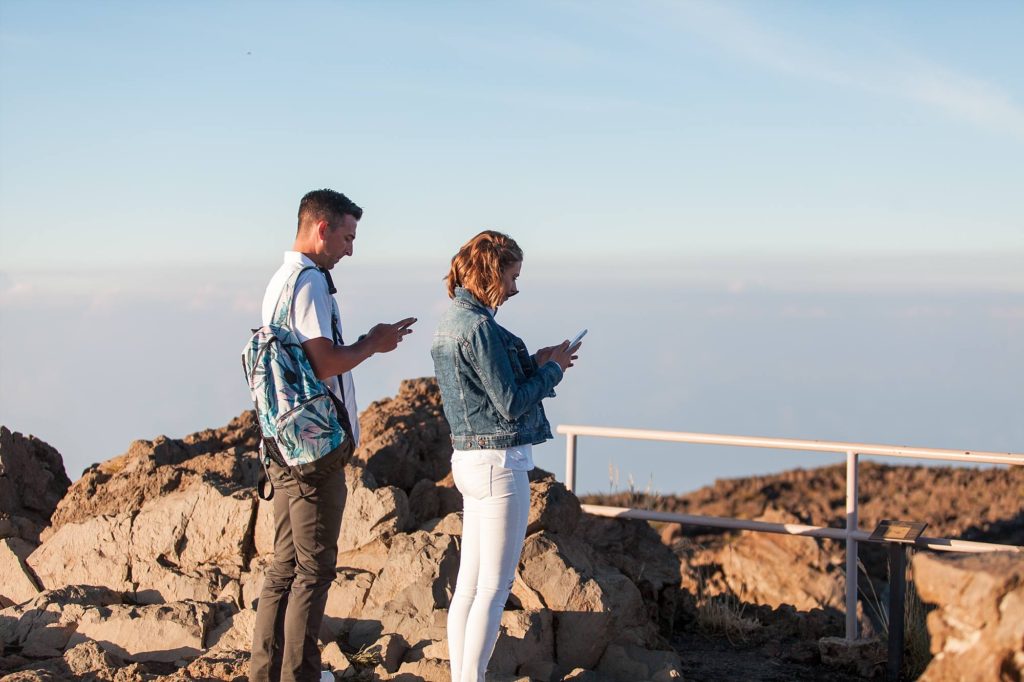 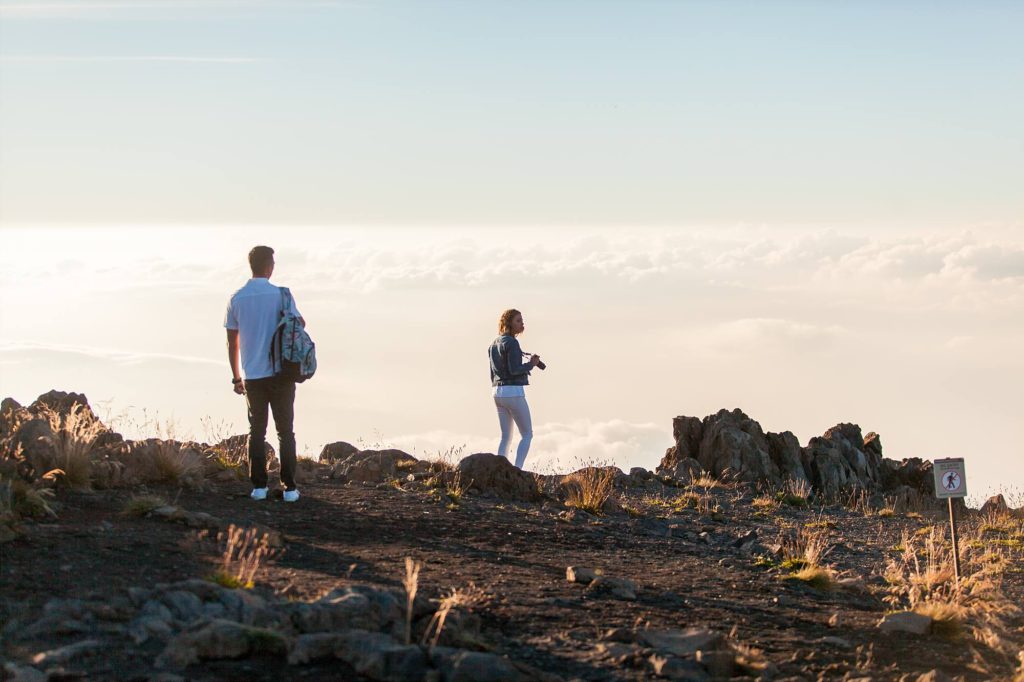 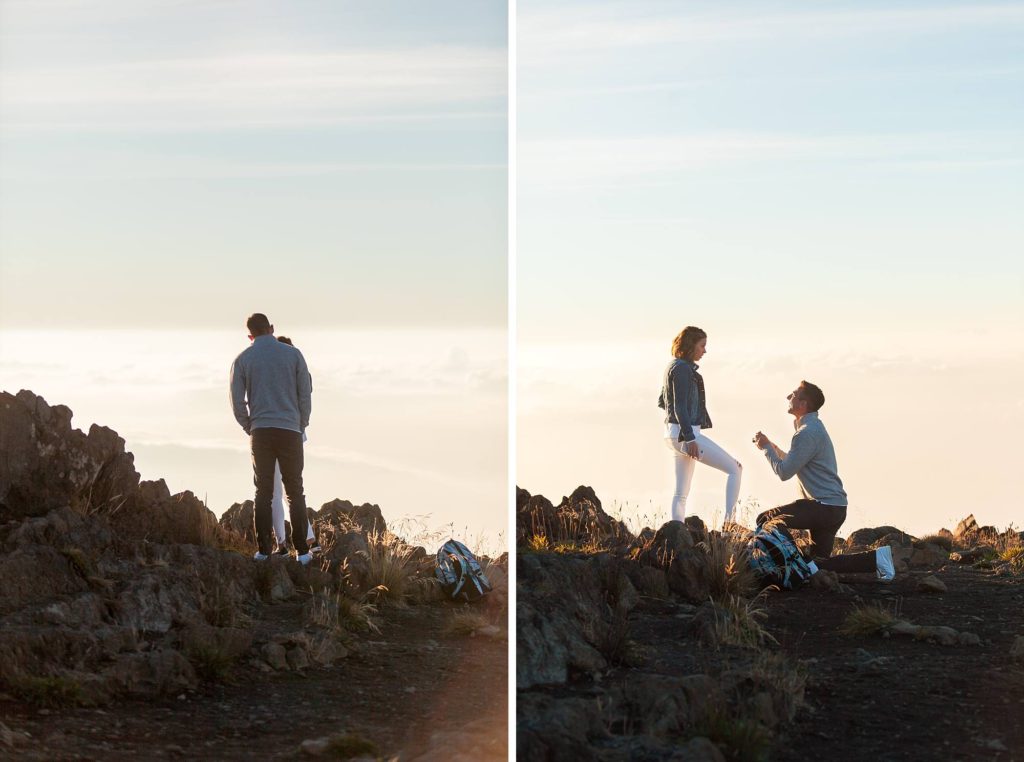 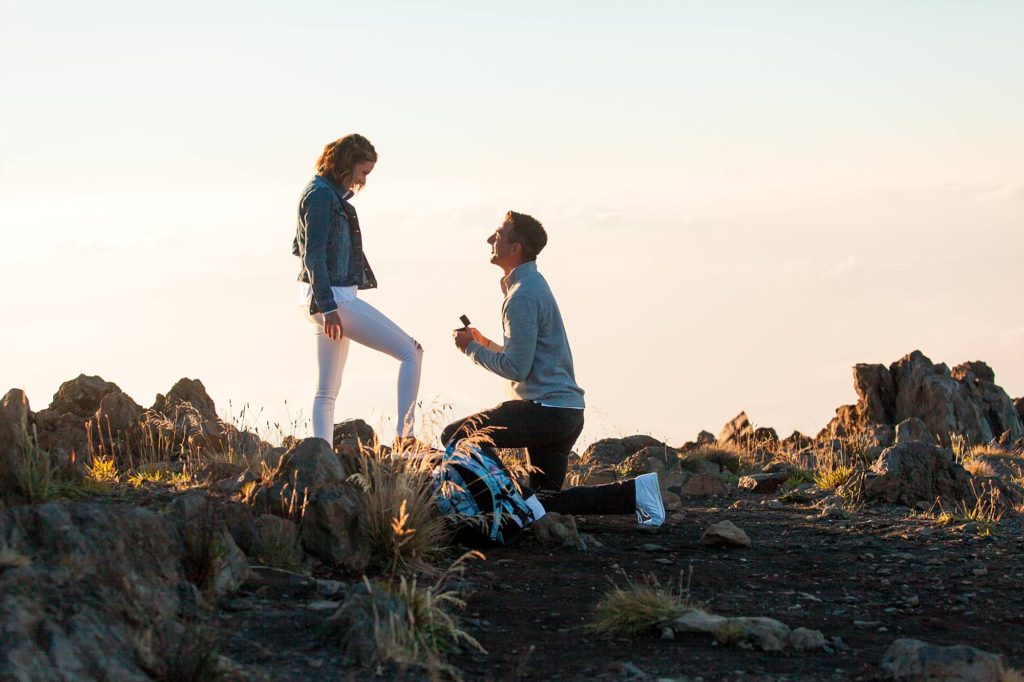 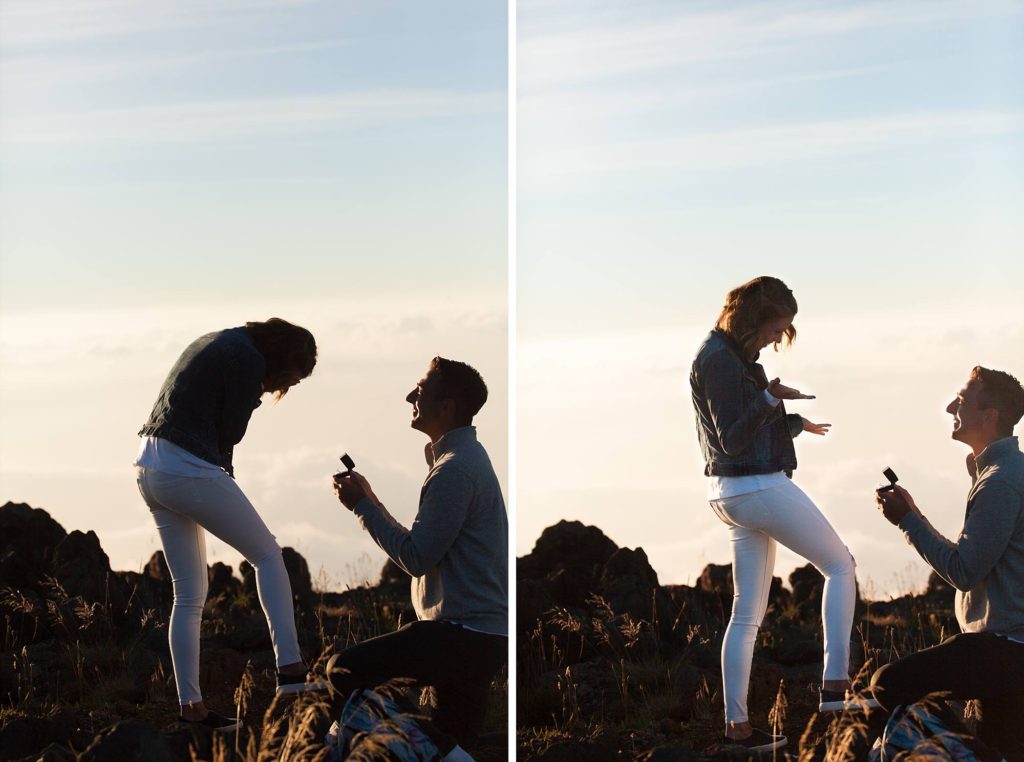 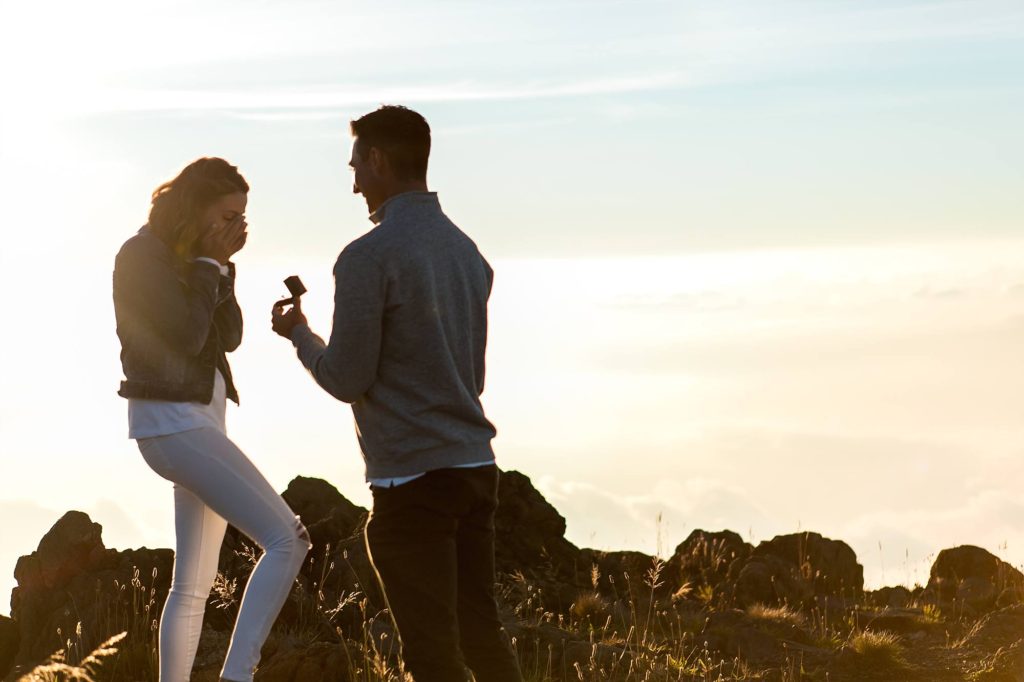 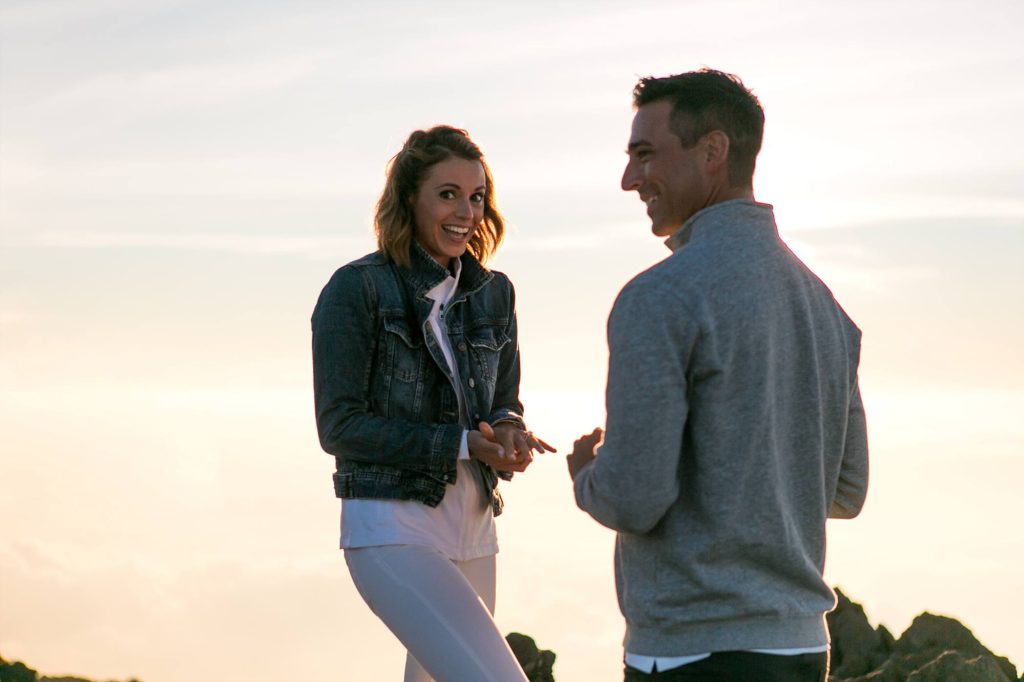 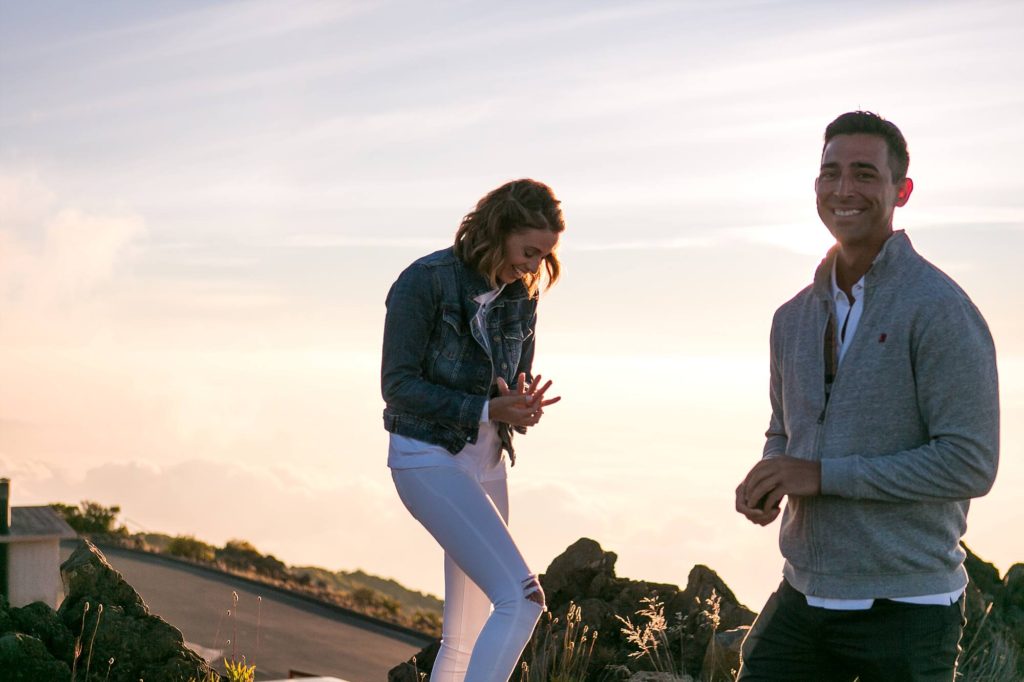 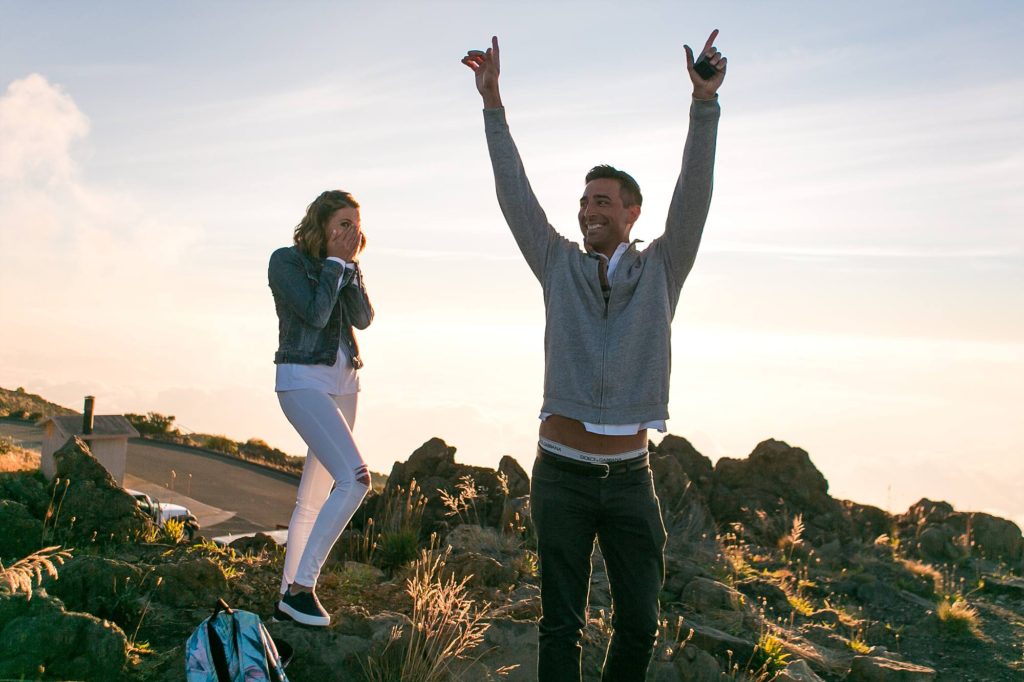 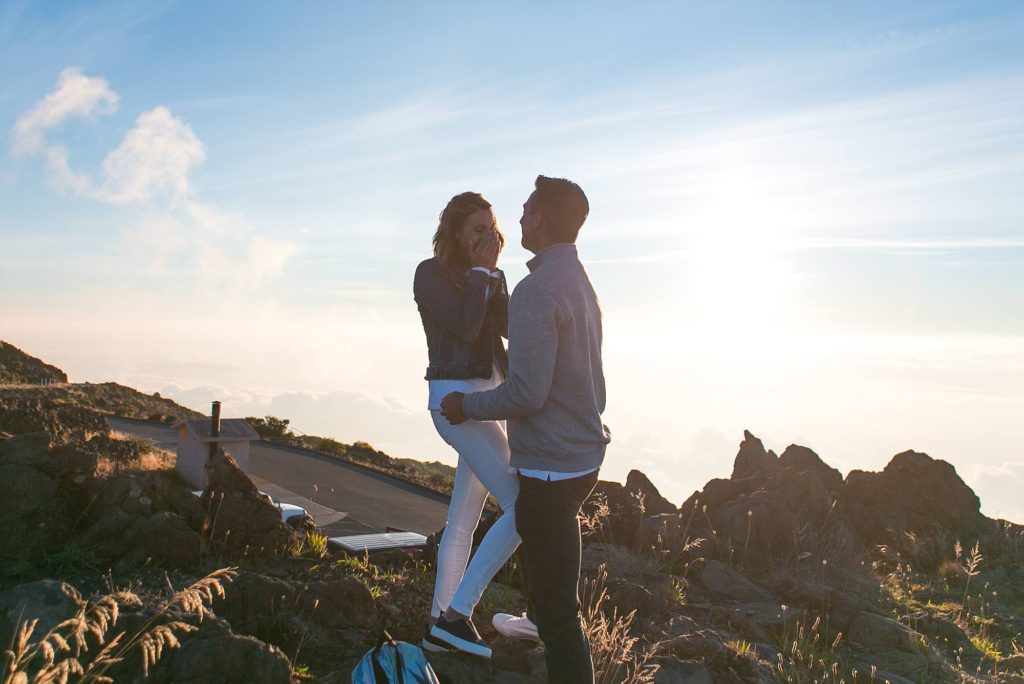 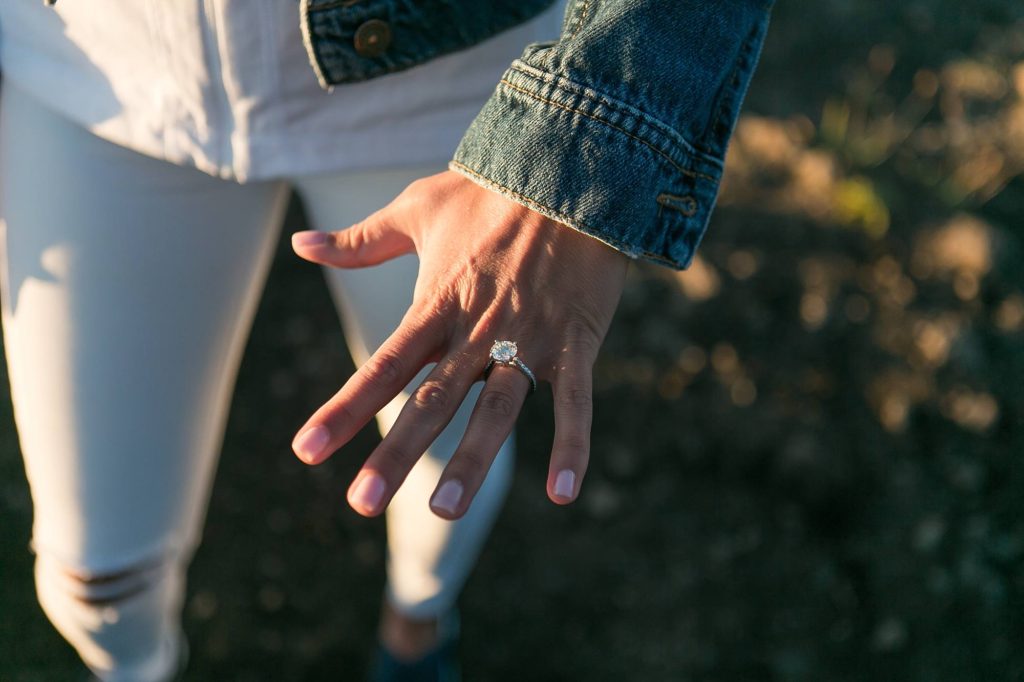 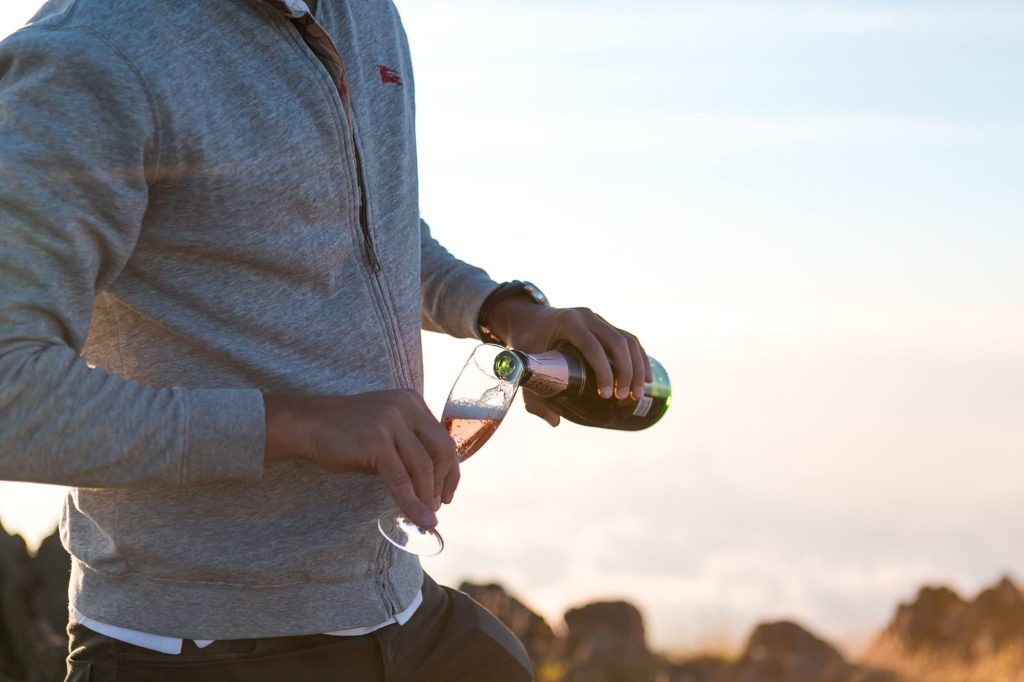 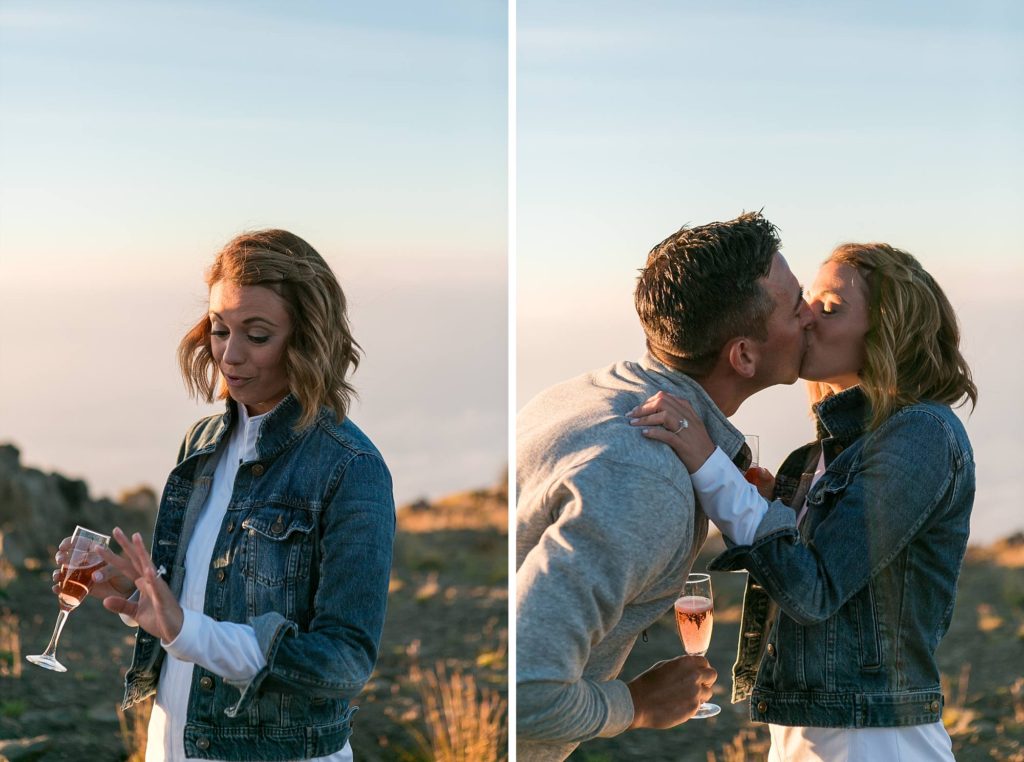 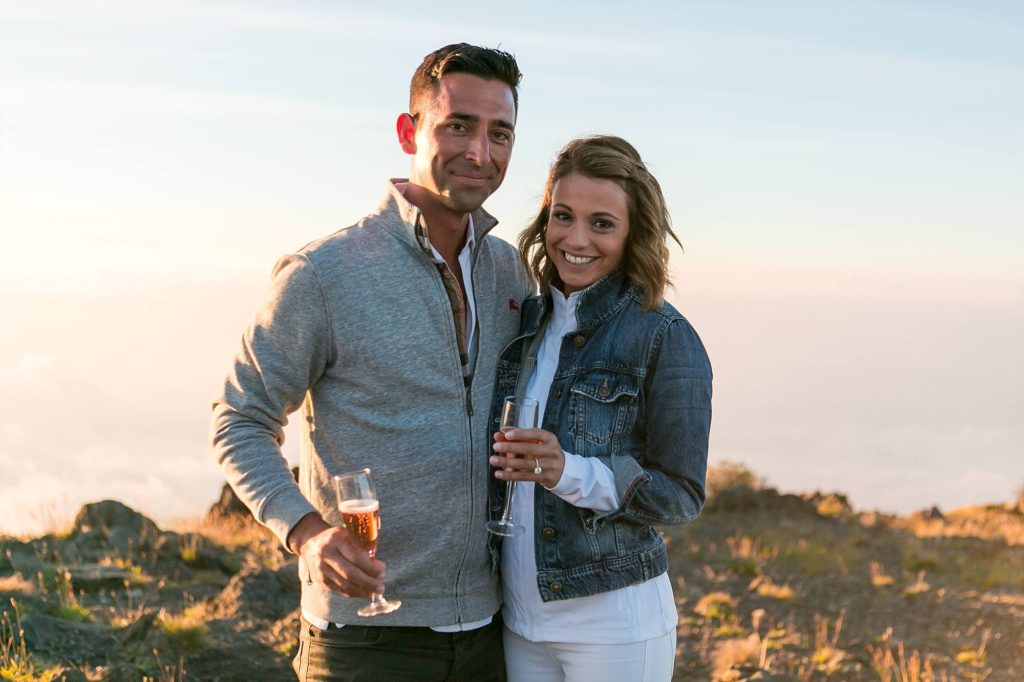 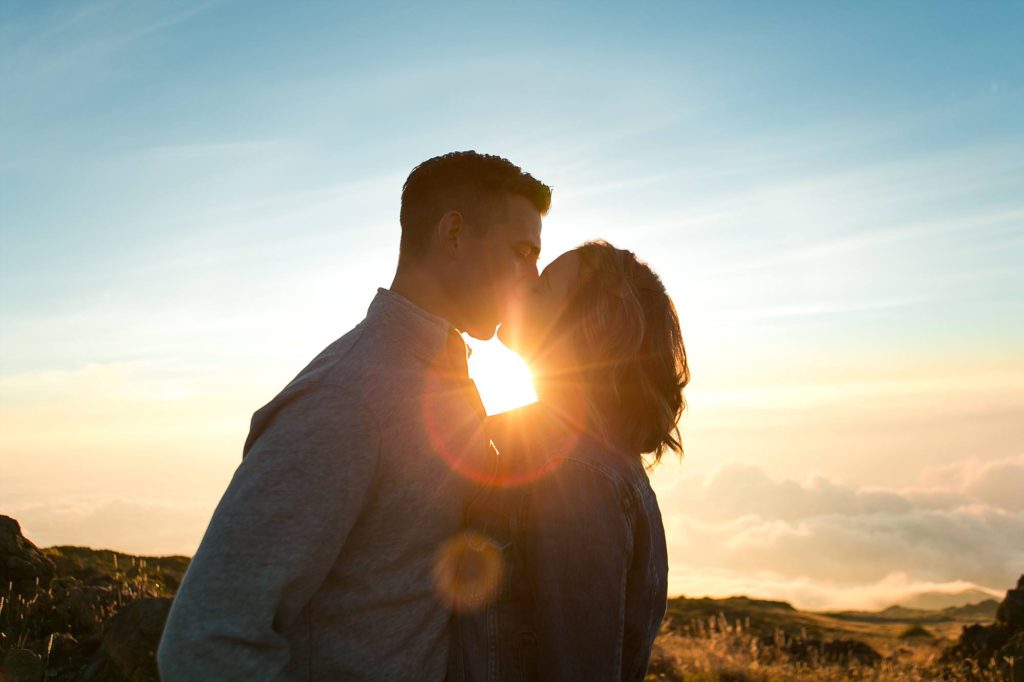 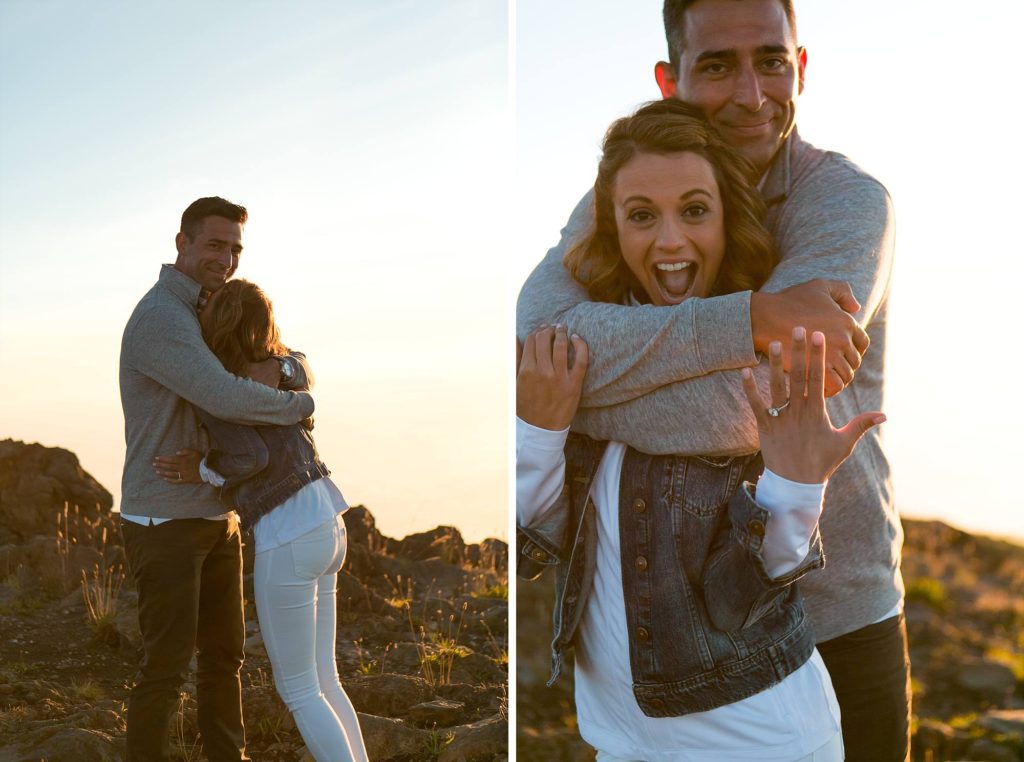 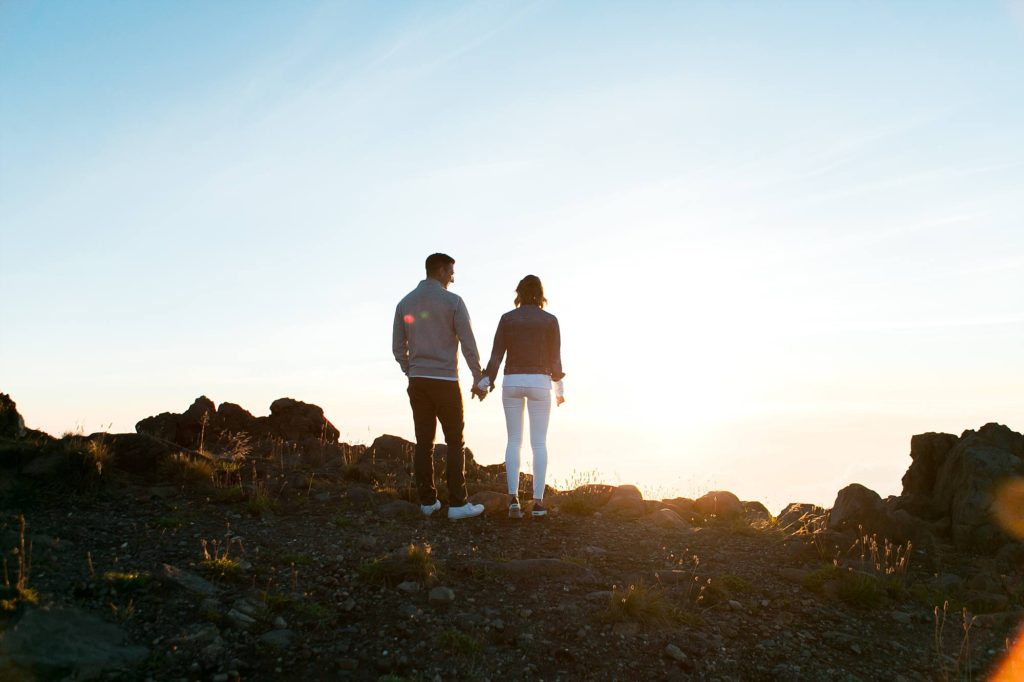 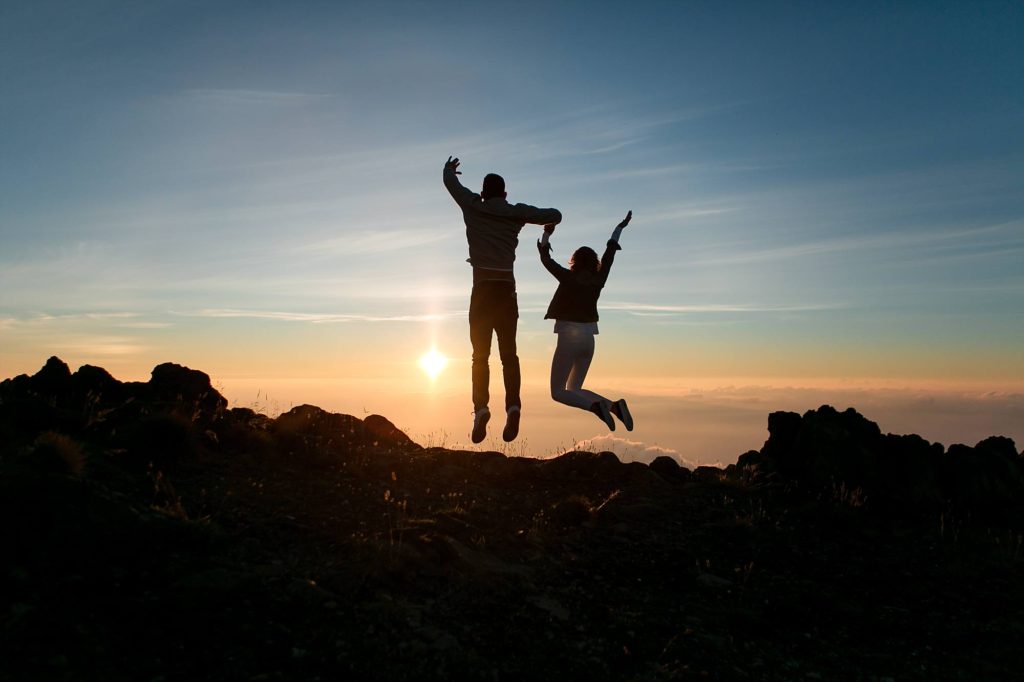 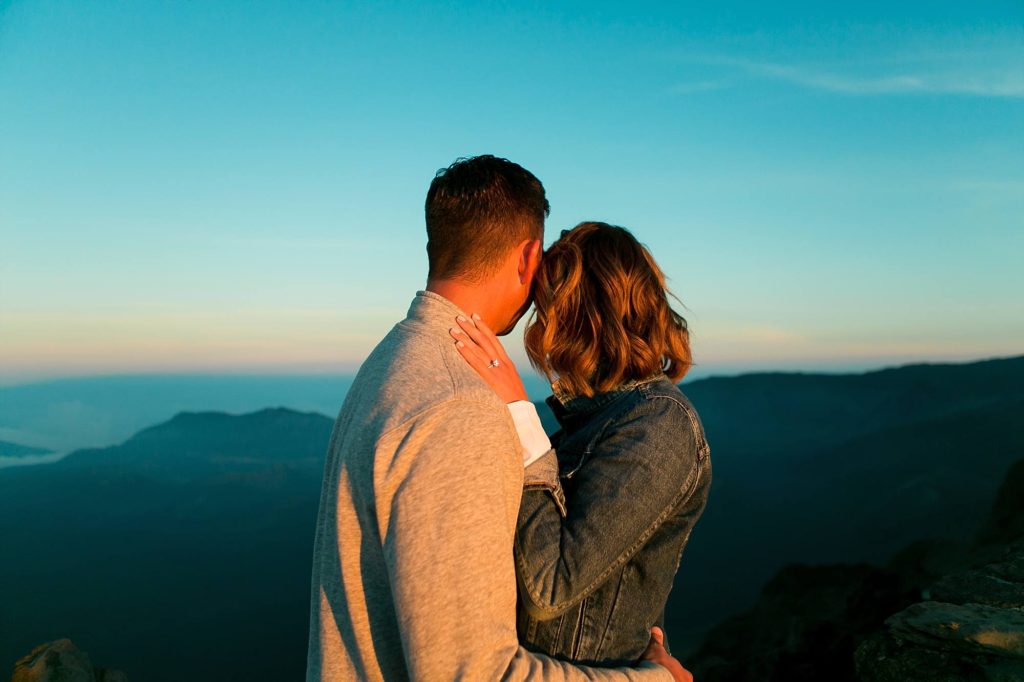 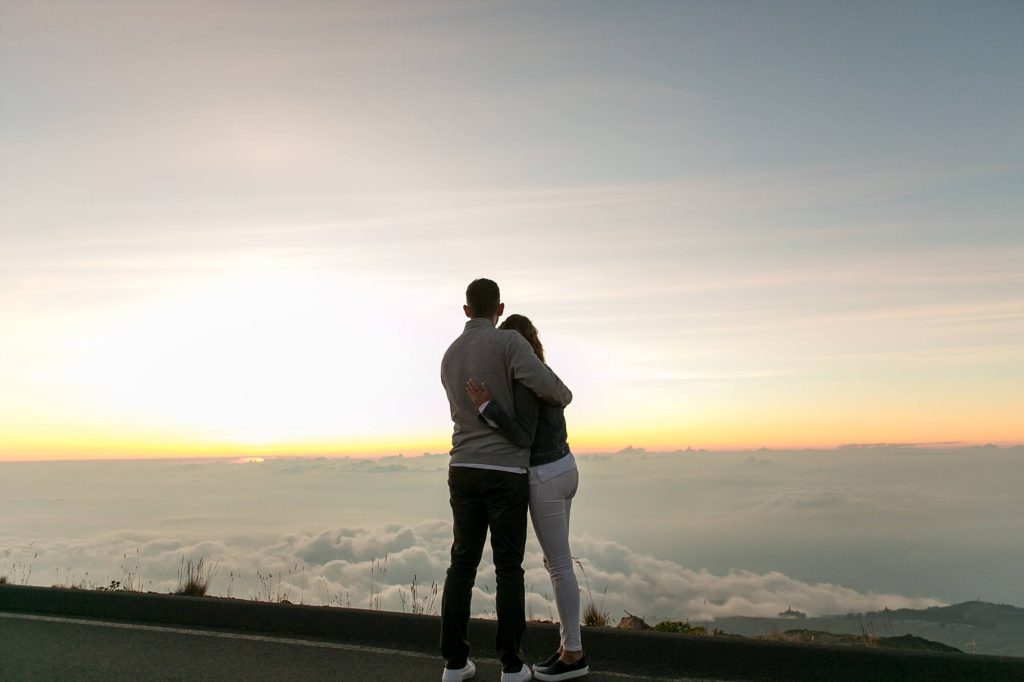 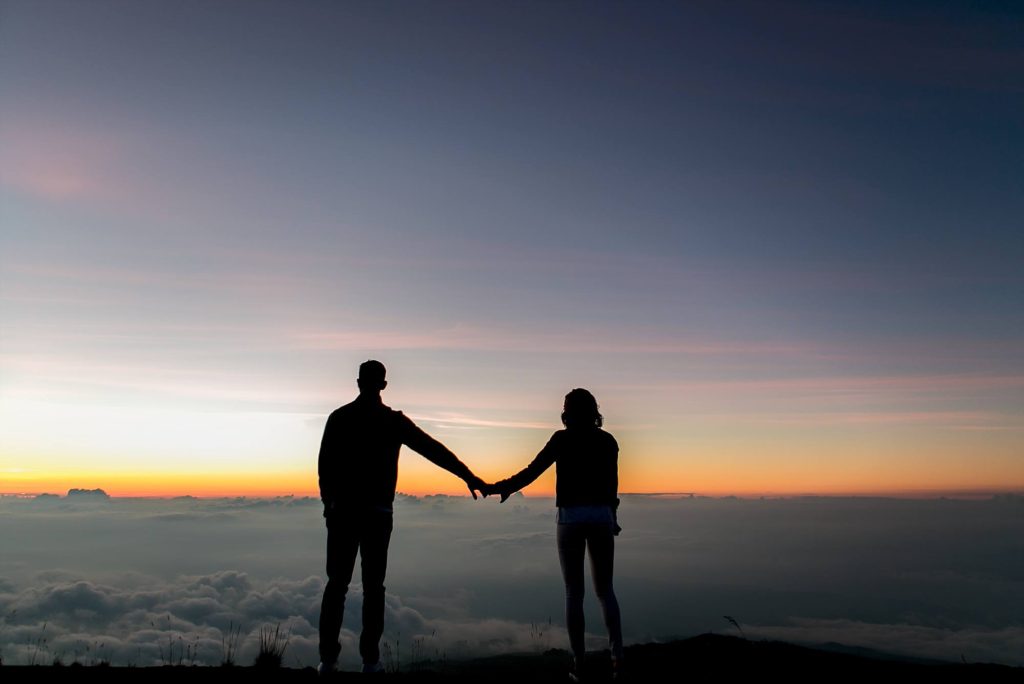 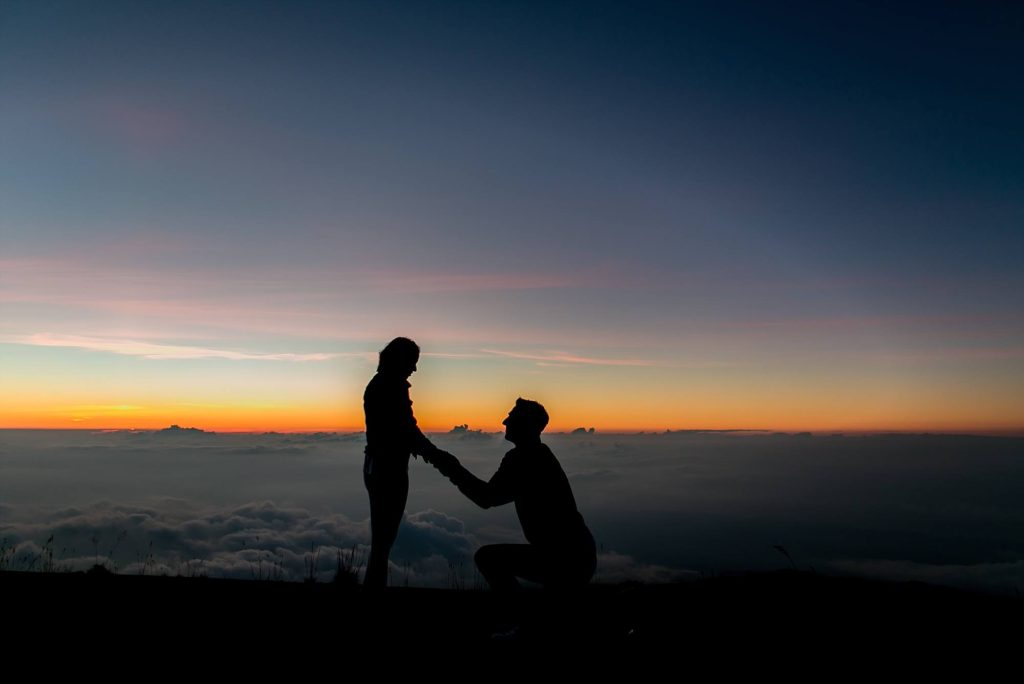 Dante and Cheryl: Congratulations on your above the clouds proposal in Maui!  What an incredible sky we had up there that day! It’s like it was made just for you two!  Wishing you two all the best.

Want to propose above the clouds while on Maui?  We can help you with that! Contact Engaged on Maui today to get your plans in motion for the perfect proposal and photographs of your big day!

Happy Thanksgiving!! 🦃 We are so thankful that

I guess you could call us professional hiders 👀

'Tis the season for engagements 💍 We help you p

Here's your reminder to never worry about the sun

Proposals are so beautiful, but we love exploring

Funny story about this day… Kevin got caught in

If you ask us... we think Hawai'i is the prettiest

One of our favorite places for proposals is Haleak