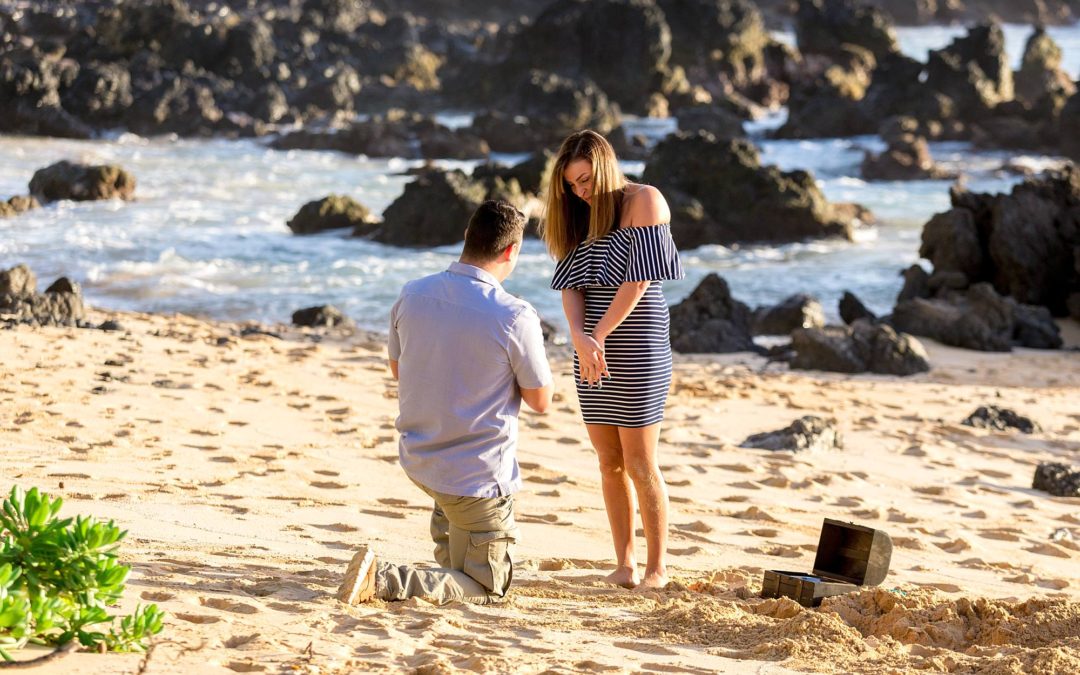 Blake and I had chatted over the phone multiple times about coming up with a cool idea for his proposal to Kristina.  He wanted to make this proposal extra special for his sweetie.  We always encourage guys to think of ways to personalize their proposals.  Anyone can get down on one knee on a beach, but to add a personal touch is the story that she’s going to tell.  I hope you love this buried treasure proposal much as we did!

Blake has this story about how when he first met Kristina she was working in a bakery.  When he came in she was holding hotdog buns.  He was there to buy chocolate covered strawberries.  So he said, “Hey, nice buns.  How much are your chocolate covered strawberries?”  And that of course sparked some conversation and the next thing you know they were dating. They are also into pirates.  It’s their jam.

So, Blake sent me a treasure chest through the mail to use as a prop for the proposal.  Of course, we filled it with hotdog buns and chocolate covered strawberries!  Our awesome photographer, Chantelle, got to dig a little hole in the beach.  She used some rocks to make an “X” for “X” marks the spot over where the treasure chest was buried.  There was a digging spade next to it, too.  I guess she made the “X” a little too small because at first Blake had a hard time finding where it was.  But luckily they found it!

When they got to “X” marks the spot, they dug up the treasure chest.  When Kristina opened the chest, she immediately knew what was going on!  She gave him this look that we caught on camera as soon as she figured it out, that is to die for!  He dropped down to one knee and asked her to marry him!  And, of course, she said, “YES!”

We had a gorgeous day and an incredible engagement session.  They had fun with some pirate themed photos that we really liked, too!  We ended up at the black sand beach and honestly, we could’ve photographed this couple all day!  There were so many photos in their gallery because they were just so photogenic! 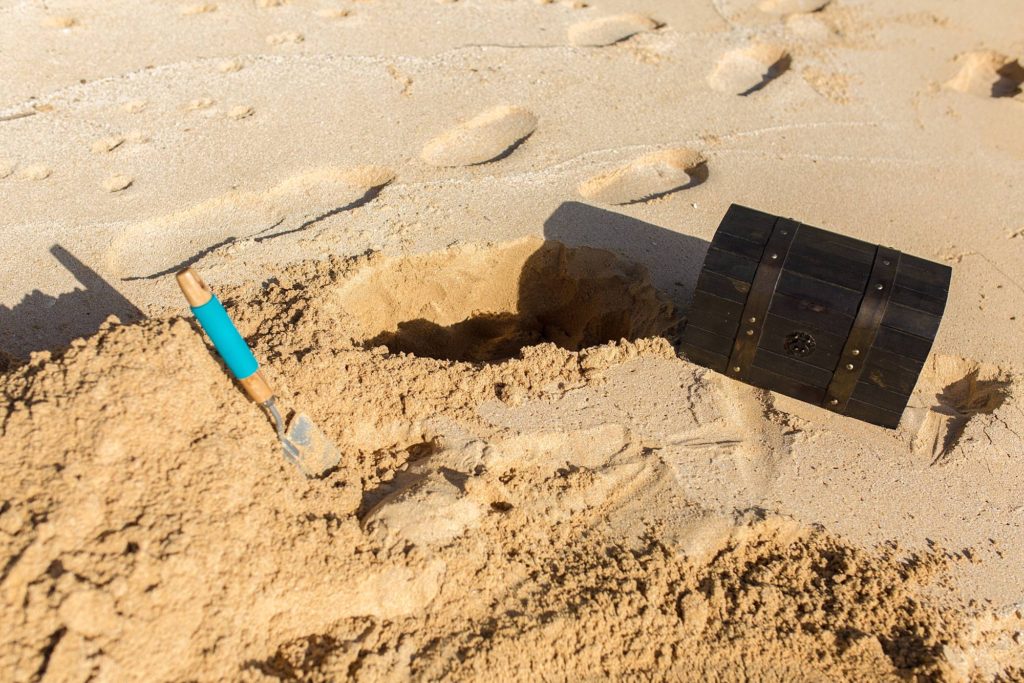 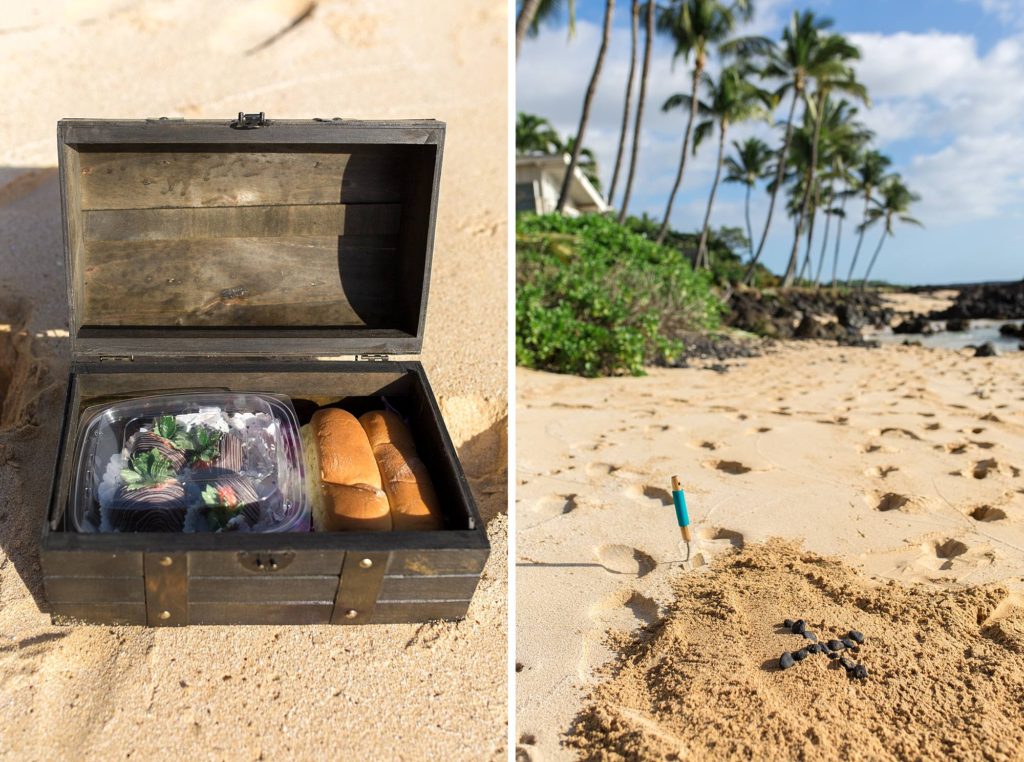 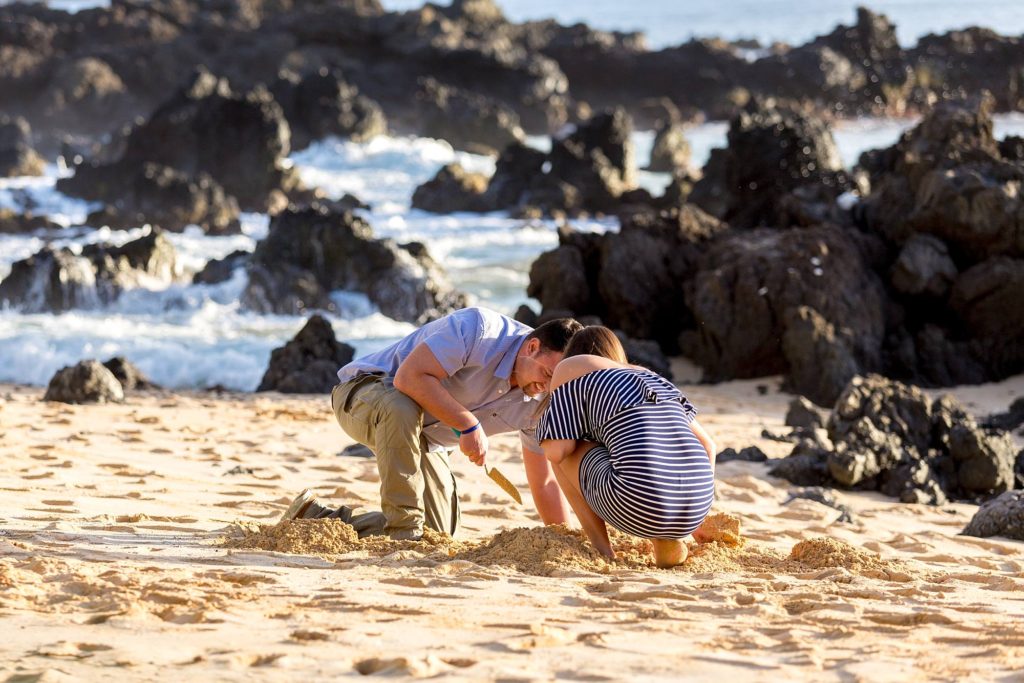 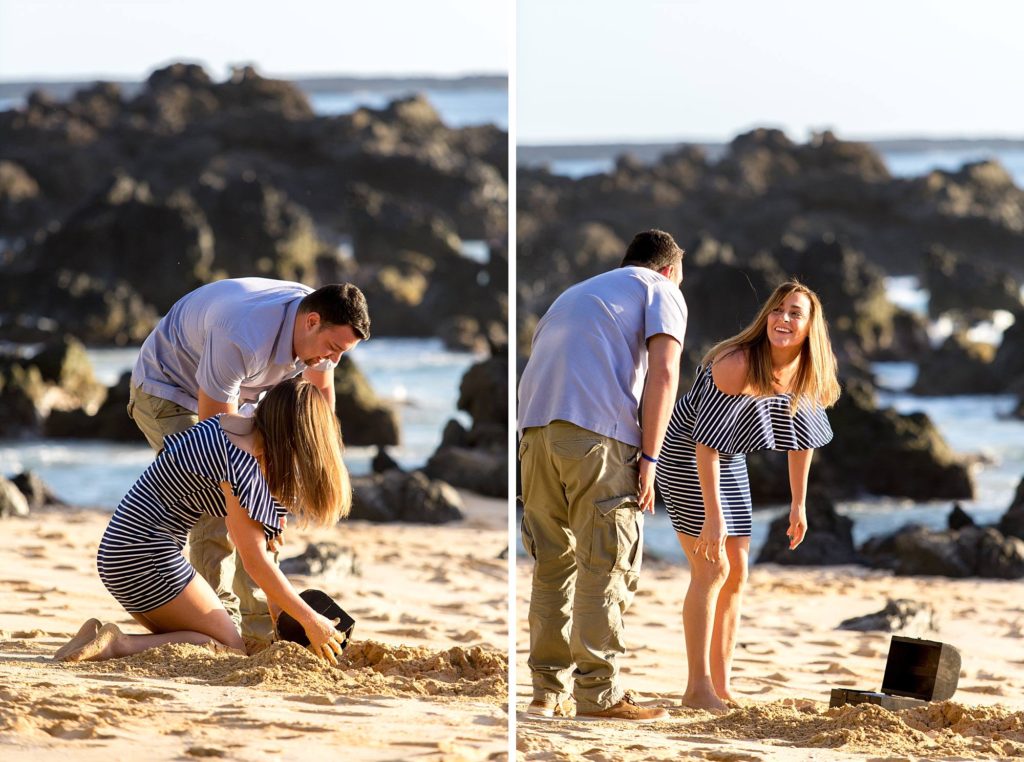 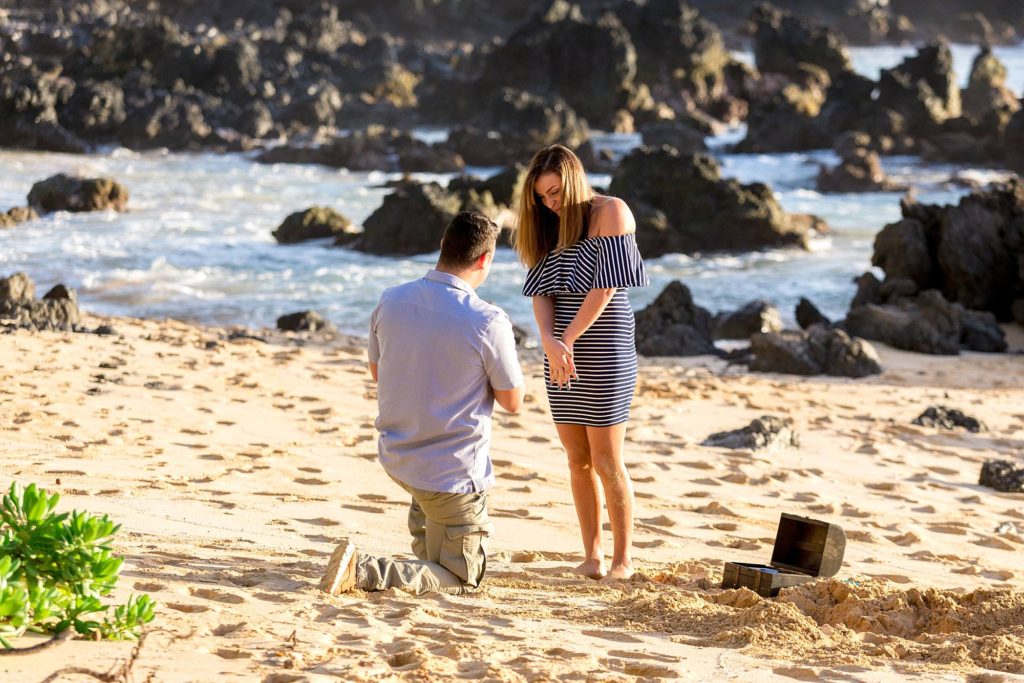 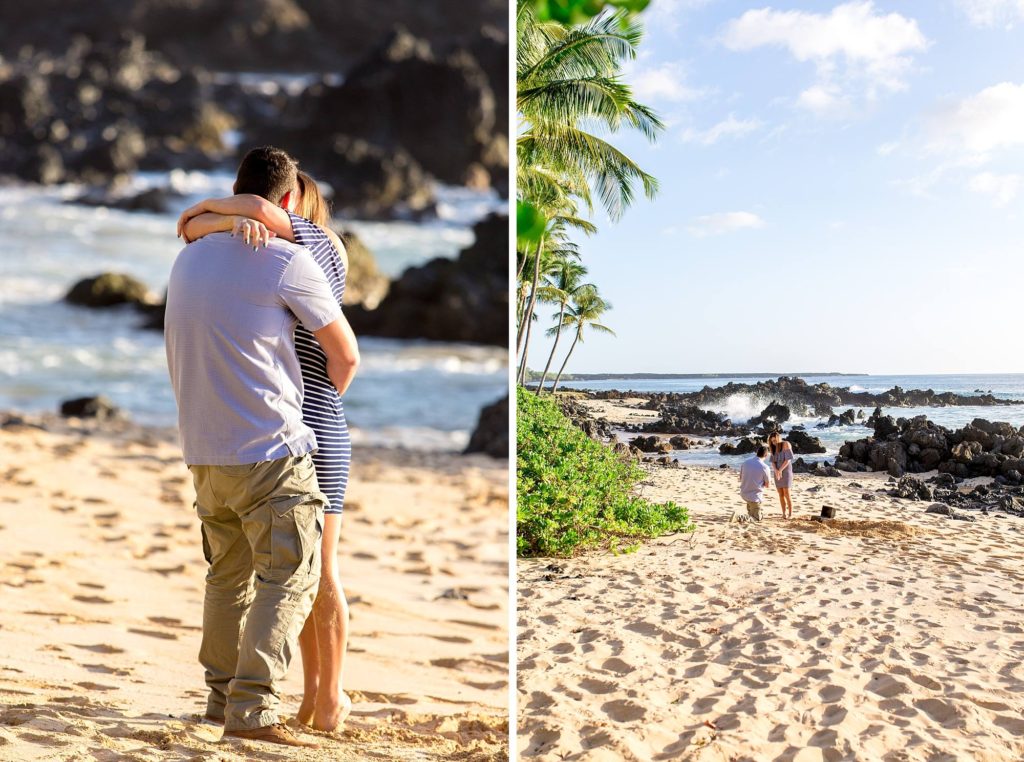 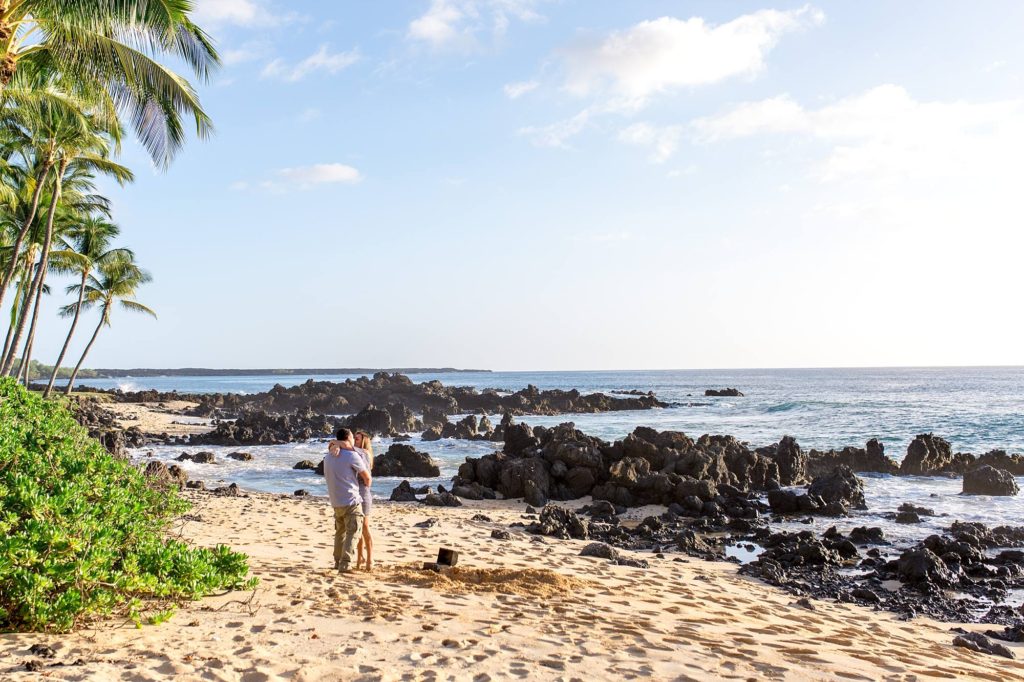 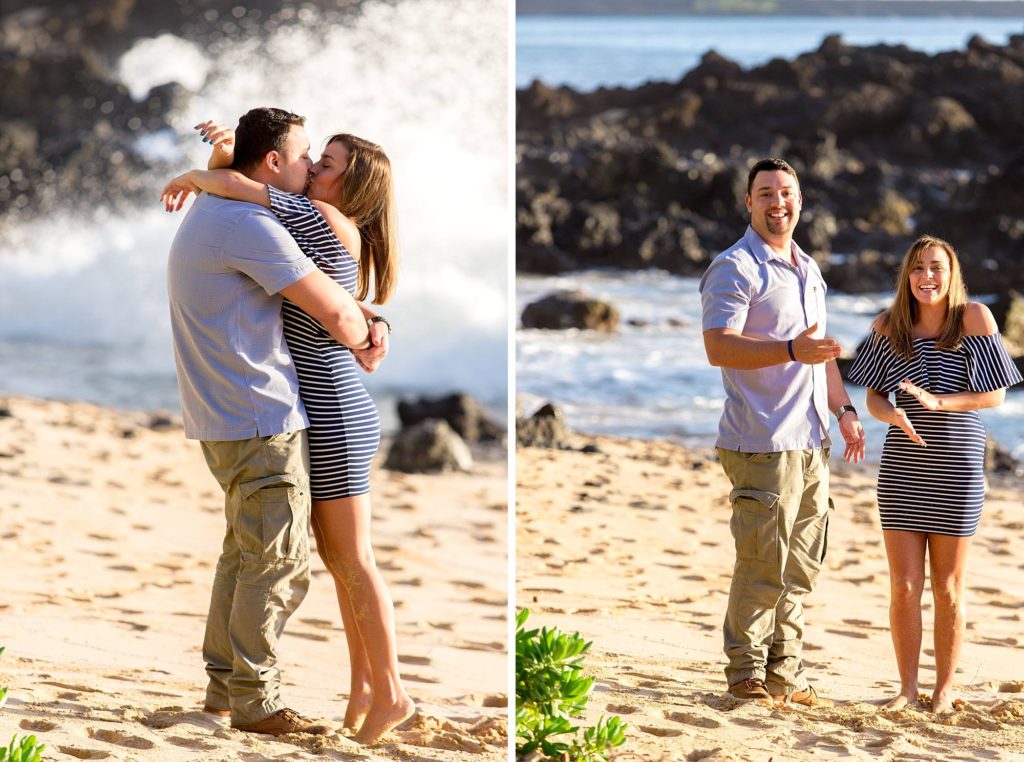 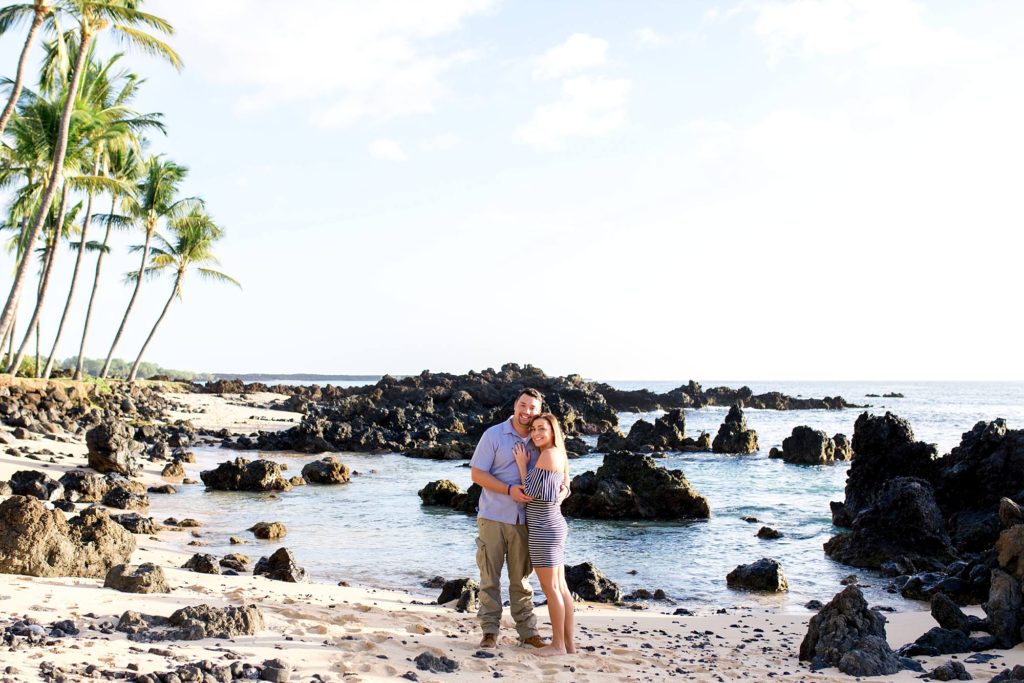 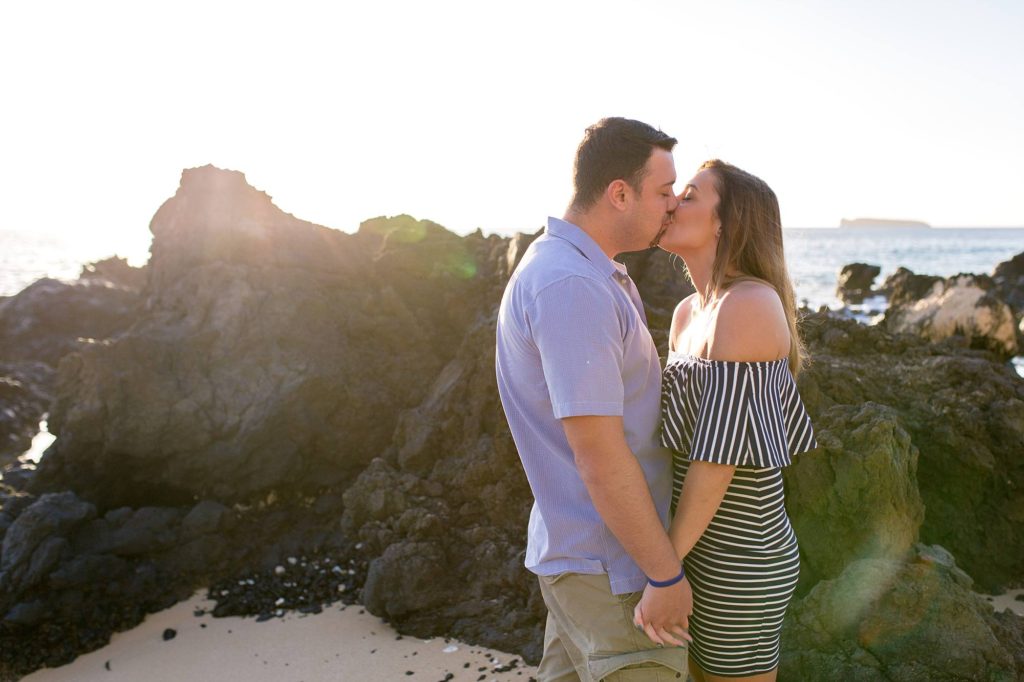 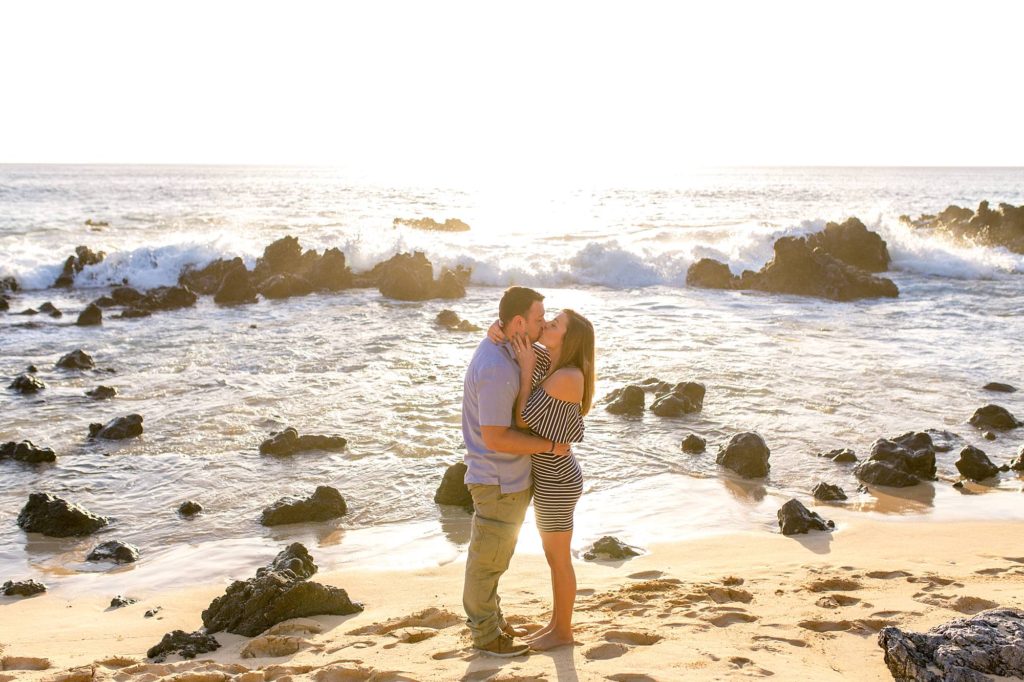 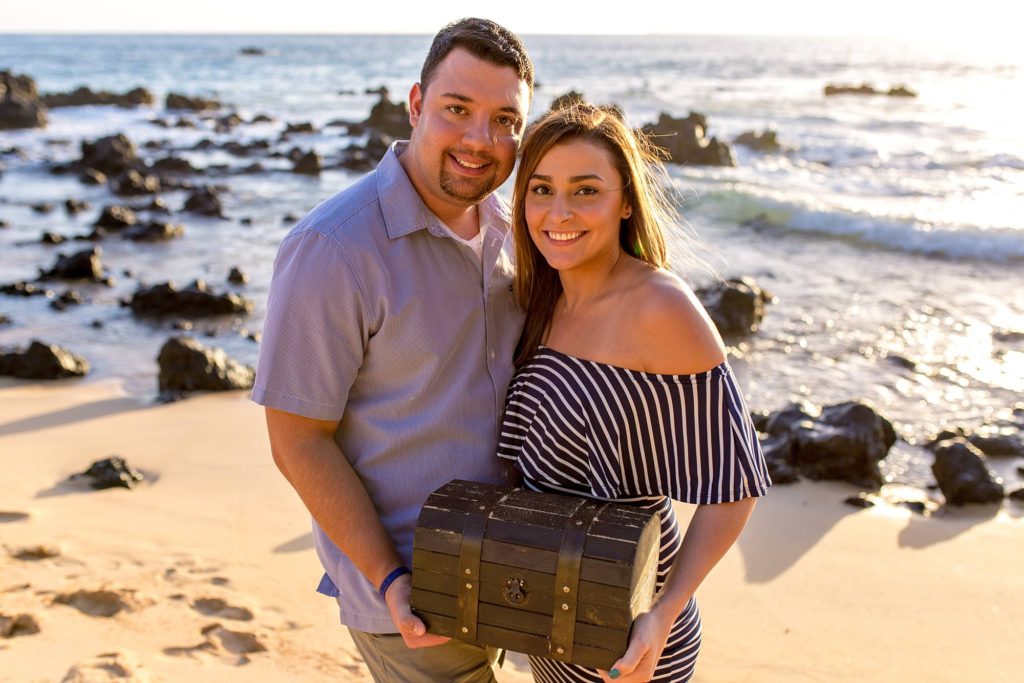 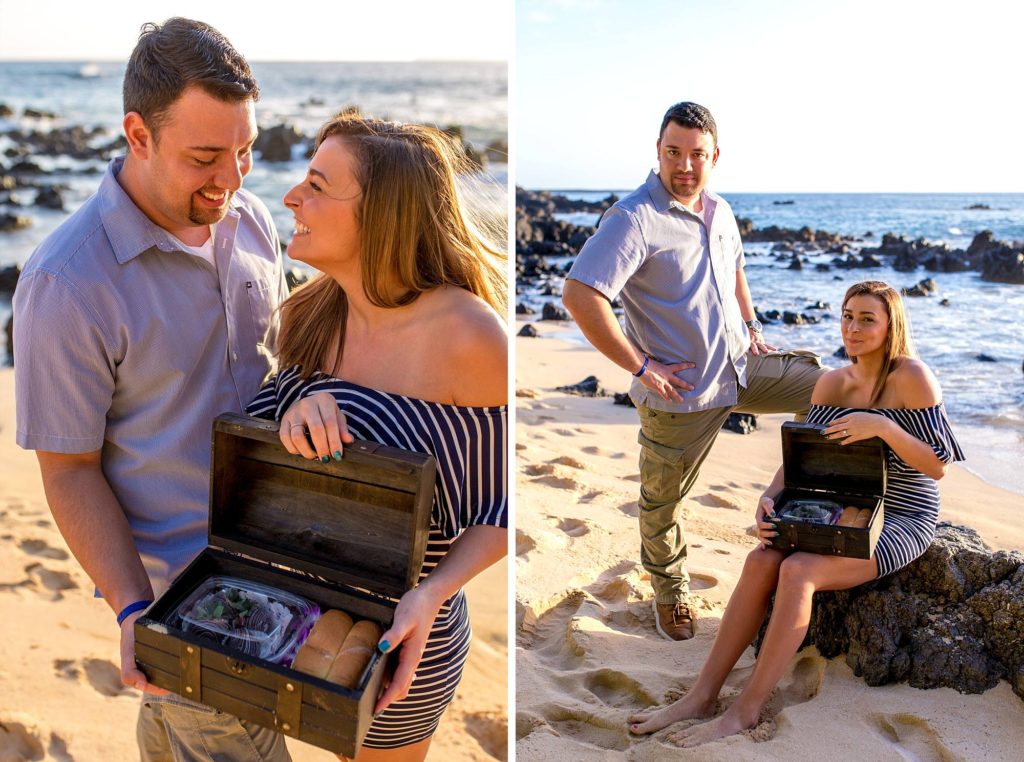 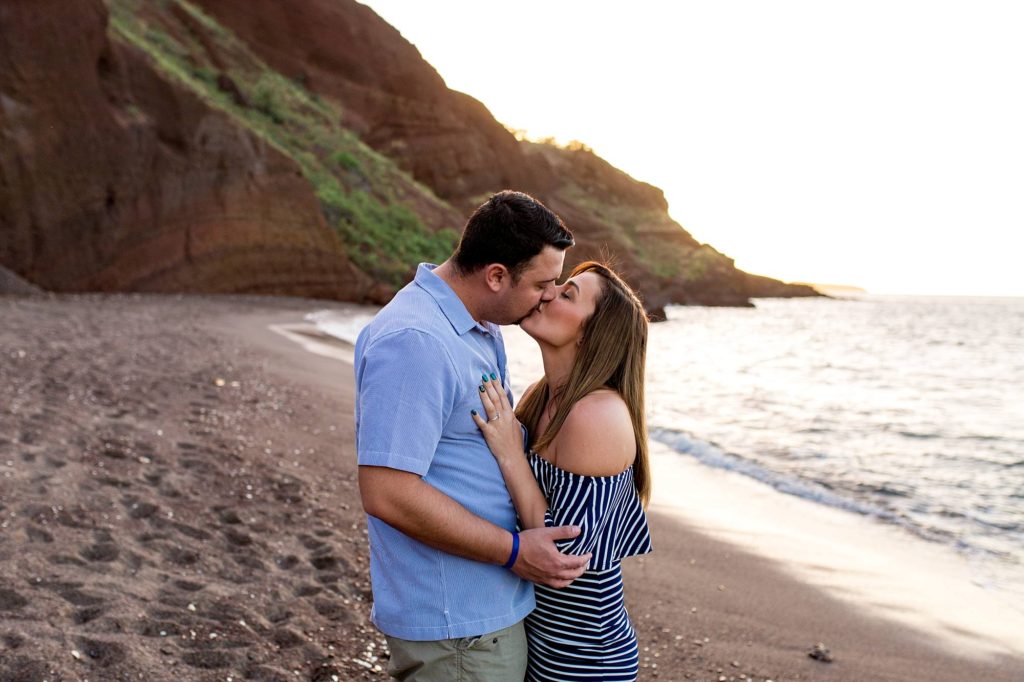 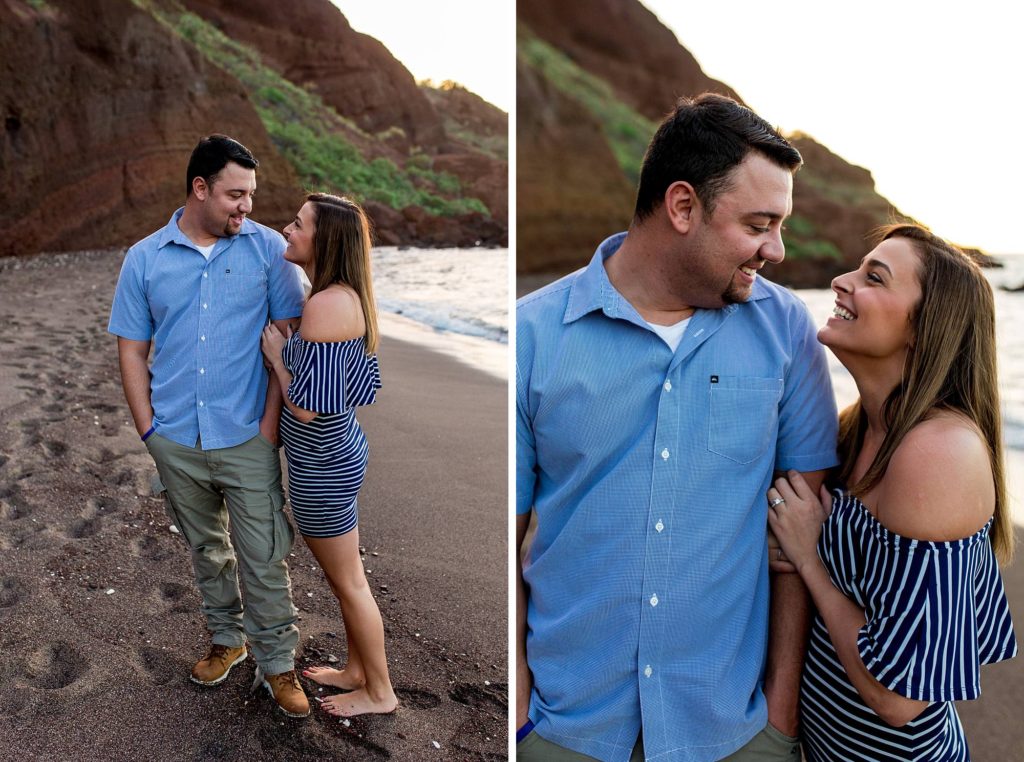 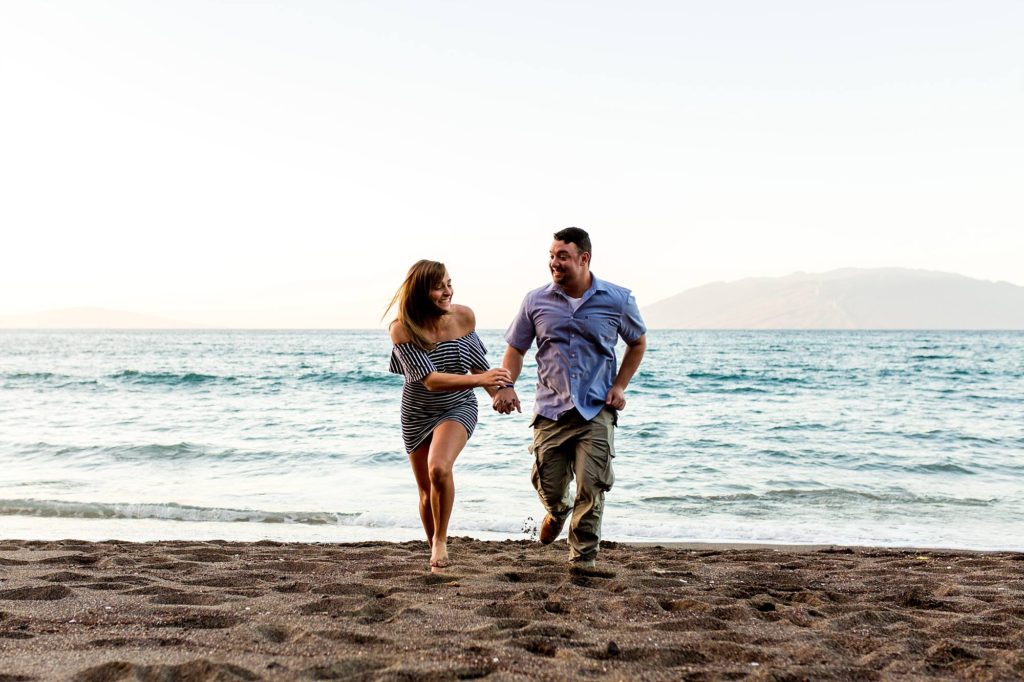 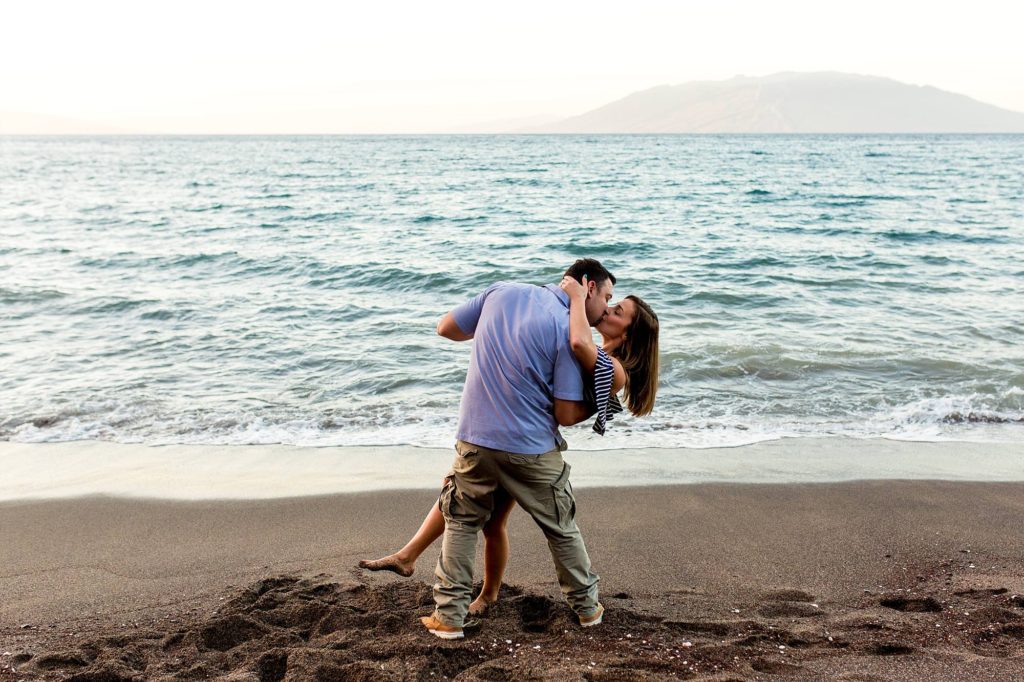 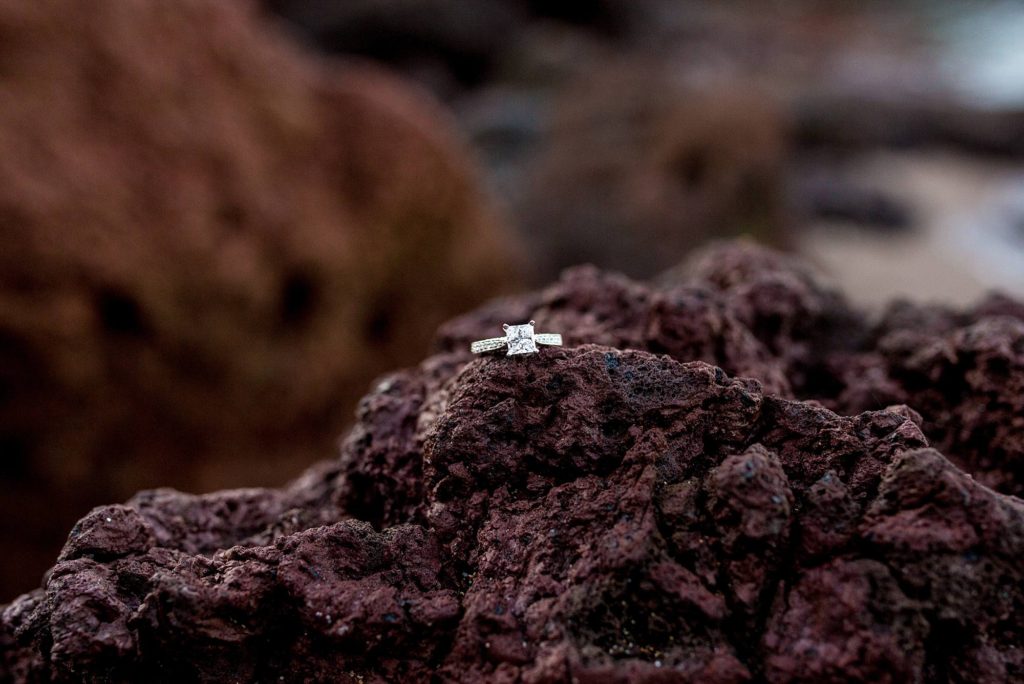 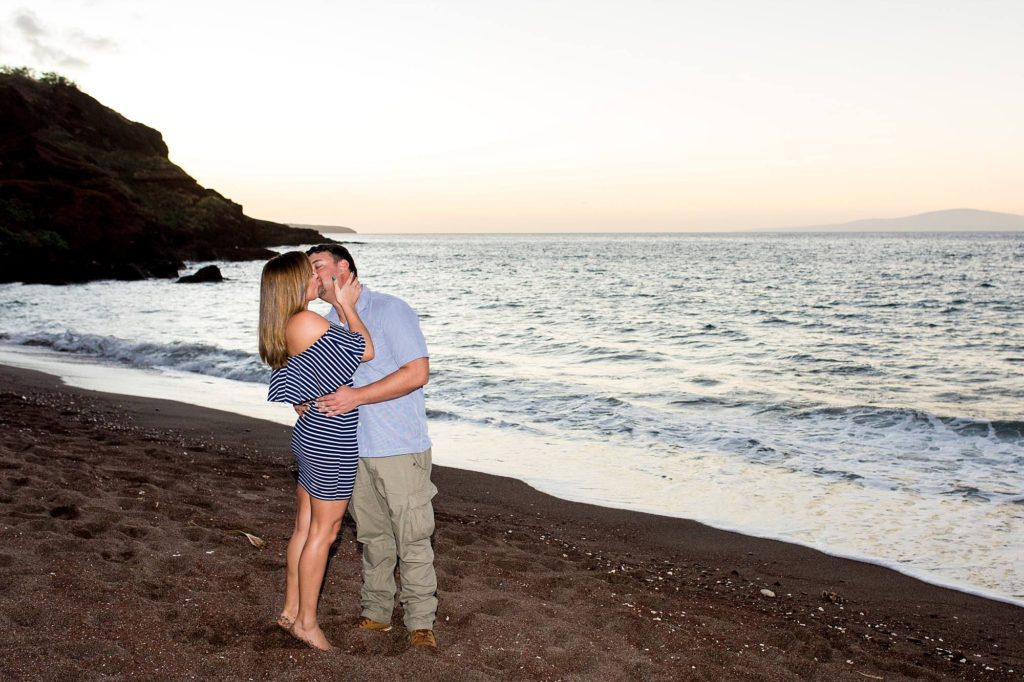 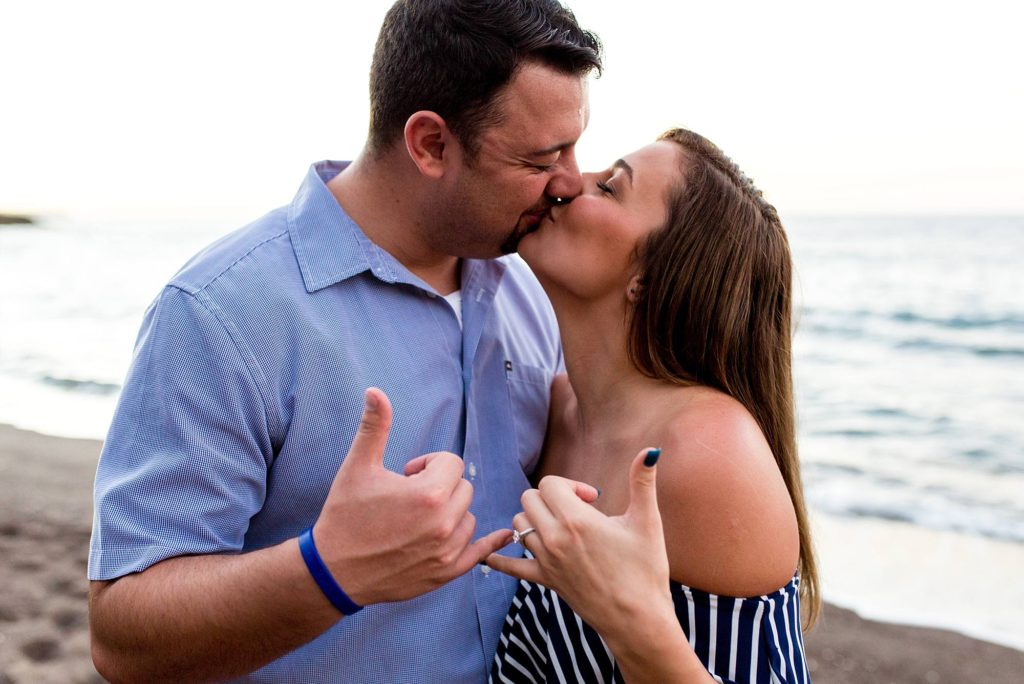 Blake and Kristina: We loved your buried treasure proposal!  Thanks for choosing Engaged on Maui to help you plan your pirate-and-bakery-inspired proposal!  What fun it was to come up with this idea with you!

Let us help you create the perfect Maui proposal for your love!  Contact Engaged on Maui now to get started! 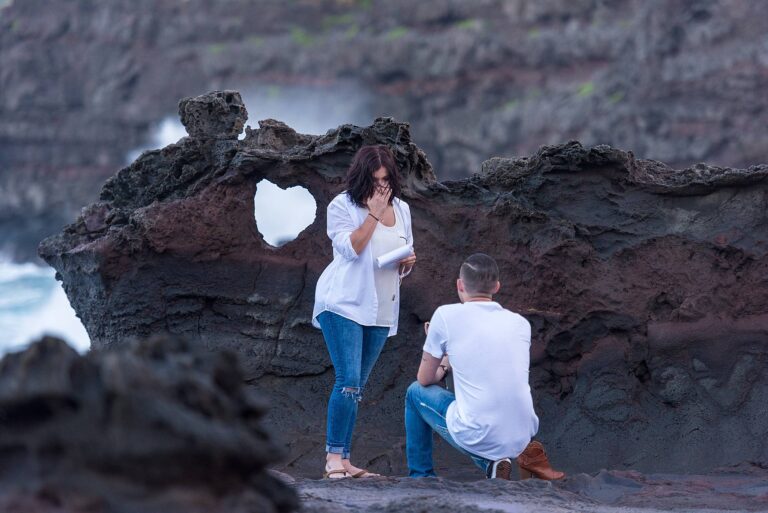 Maui Sunset Proposal at Blowhole in Northwest Maui Sometimes things don’t always pan out as we expect them to. But in this case, I’m so, SO glad they didn’t. This Maui sunset proposal at Blowhole had rainbows, an epic sunset, and perfectly timed sea-spray! THE PLAN: When Scott reached out to me, he already knew… 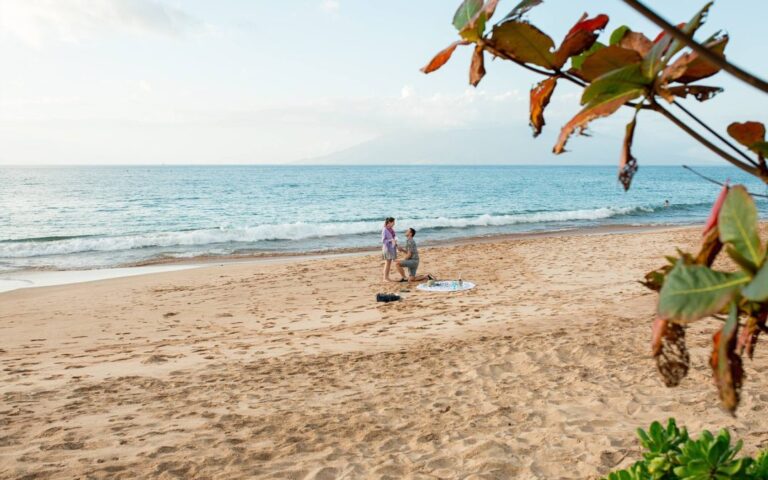 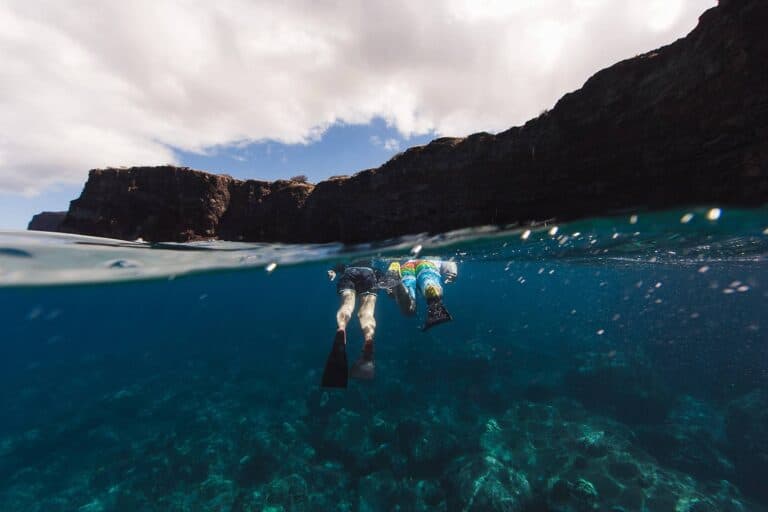 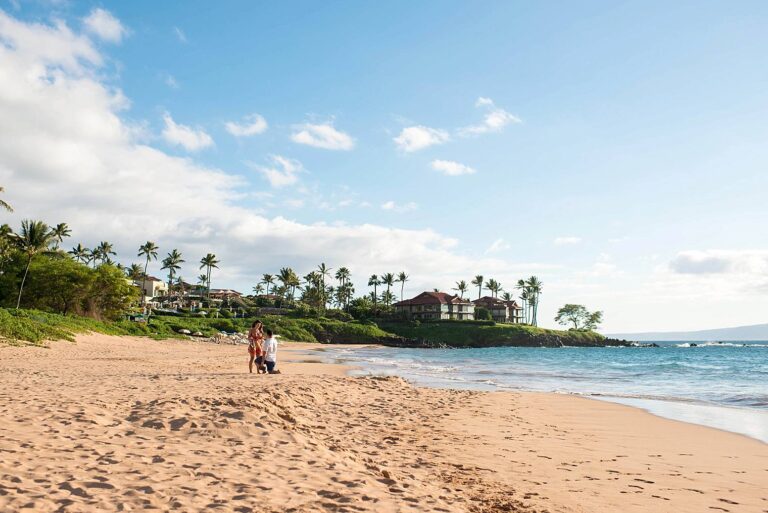 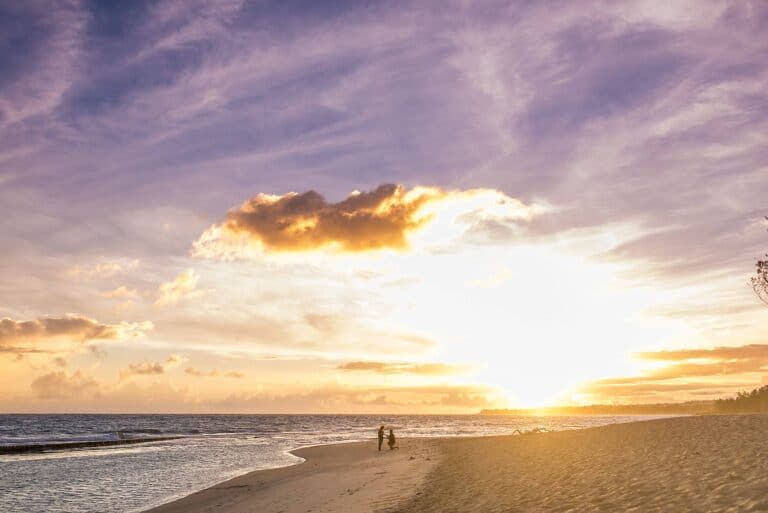 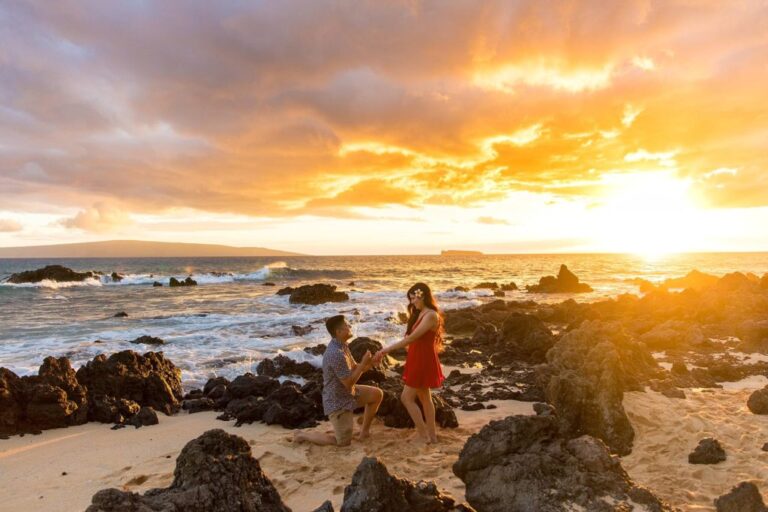 Stunning Sunset Proposal in Wailea Robert wanted to pop the question at sunset while they were on Maui.  We’ve just been having such beautiful sunsets lately, I knew he would be thrilled with this stunning sunset proposal in Wailea.   THE PLAN: At the pre-arranged time, Robert would take Alexis on a walk down the…