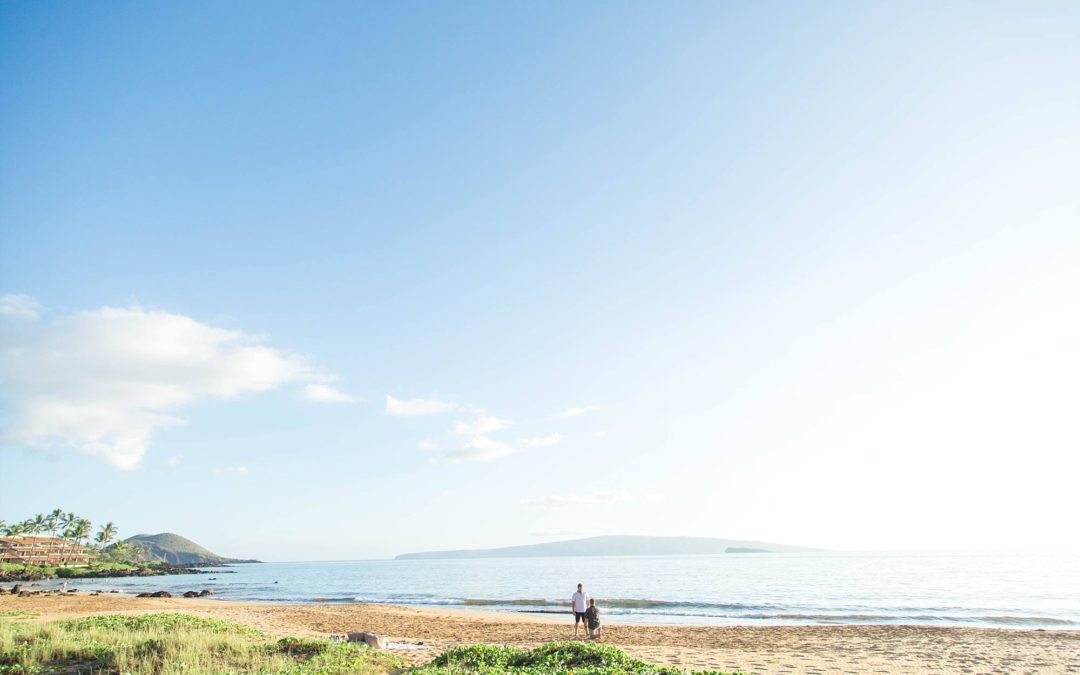 Imagine my surprise when I was contacted by Colten, who was ready to propose, and he was unsure if we could pull off his same sex picnic proposal on Maui.  Since he hadn’t seen any Maui gay proposals on our site, he wasn’t sure if we do them.  OF COURSE WE DO!  I’m thrilled to be blogging this proposal so hopefully no one else will be unsure!

Colten wanted a romantic sunset picnic for his proposal.  We set that all up for them and it looked terrific!  Earlier in the week, Colten and I secretly met up, and he gave me a pillow to put on the blanket.  He had special-ordered the pillow.  It said, “It all began with a case of beer and a bottle of Jack.”  We, of course, added a final surprise touch to the blanket to tie it all together:  some beer and a bottle of Jack Daniels.  (Which they didn’t drink on the beach because it’s illegal).  But it did add that extra personal touch.

Colten asked Braydon to take a walk down to the beach so they could watch the sunset that evening.  Once the couple showed up on the South Maui beach, they quickly came upon the romantic beach blanket laid out with photos of them, pillows, roses, champagne, and more.  Braydon was so surprised when saw the picnic set up.  Colten then led Braydon out closer to the water and popped the question!  Braydon said YES!

We had a fun engagement session right there at that South Maui beach.  We got some beautiful sweetheart shots of them during sunset and some fun shots of them running through the waves.  At the end of their session, some friends they were staying with on island came out to celebrate with them.  We had a terrific session. 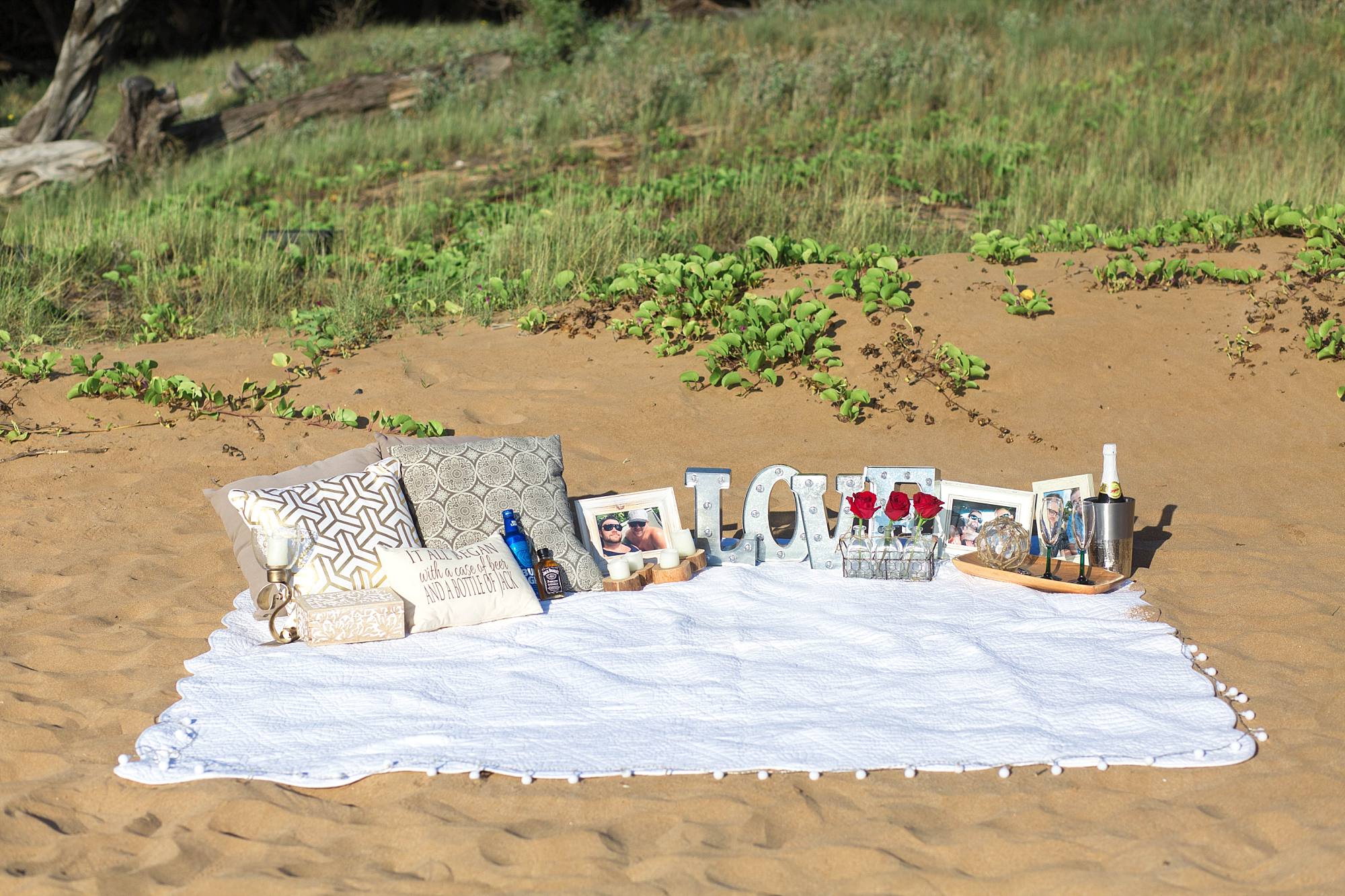 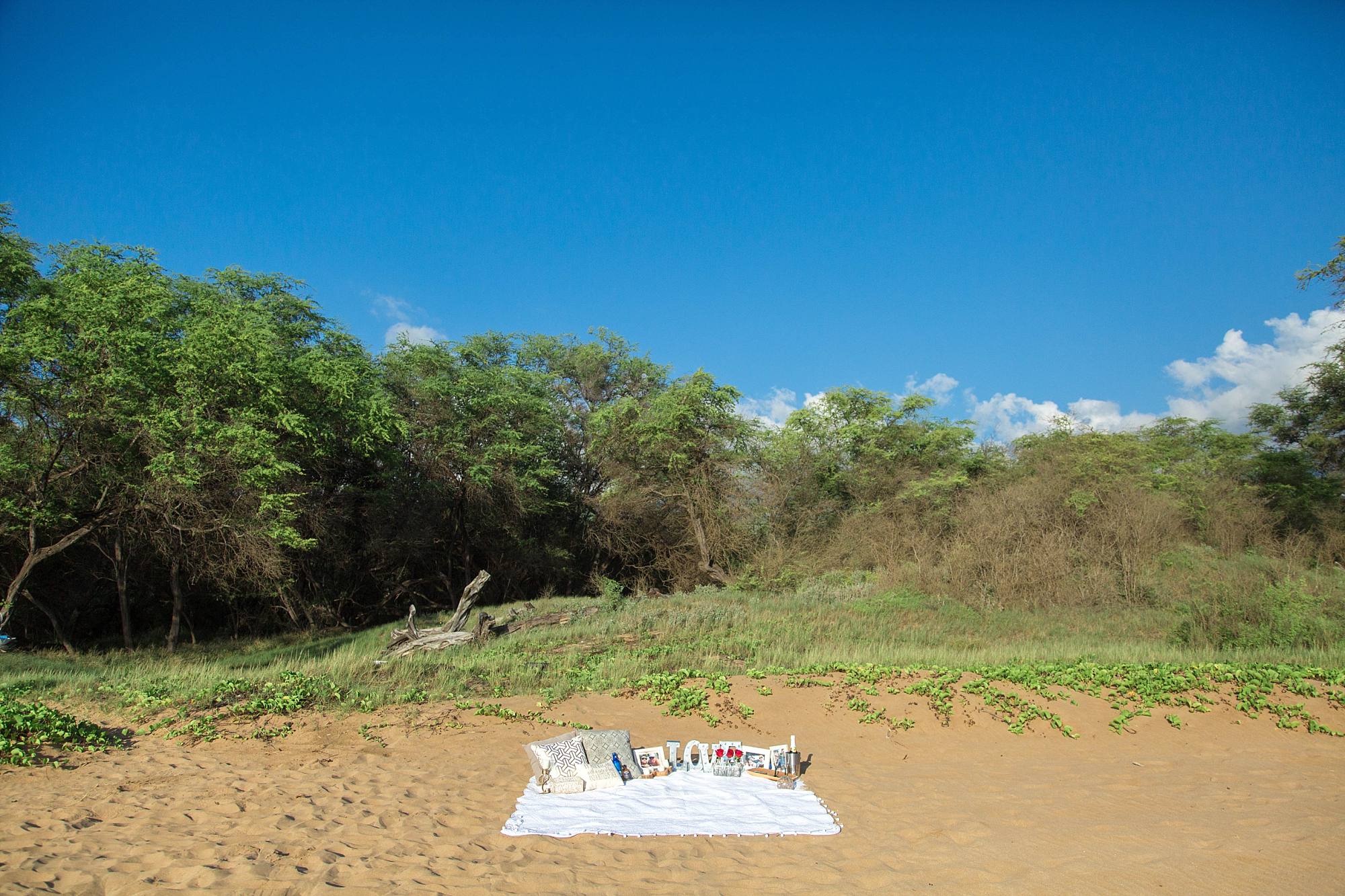 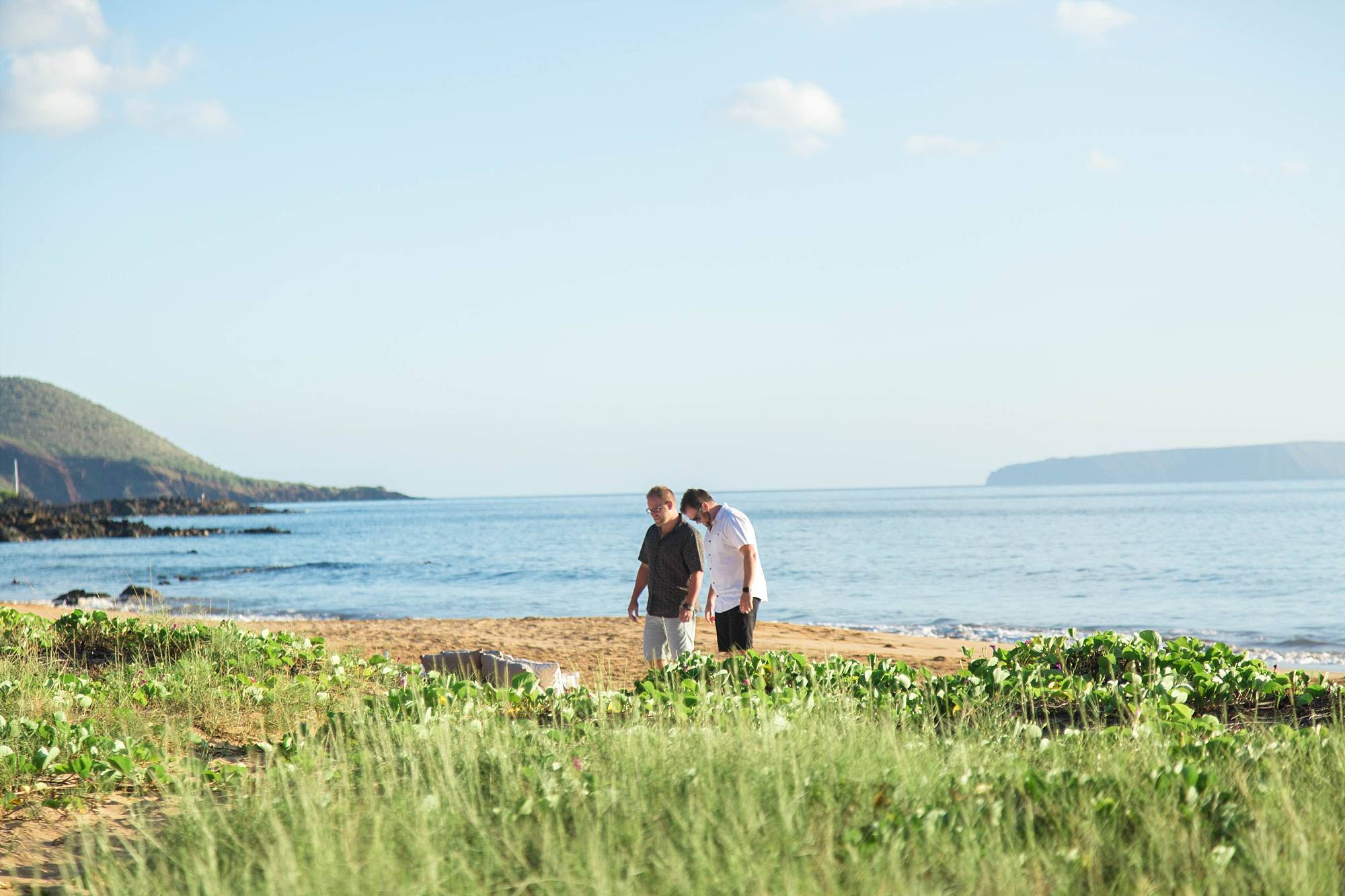 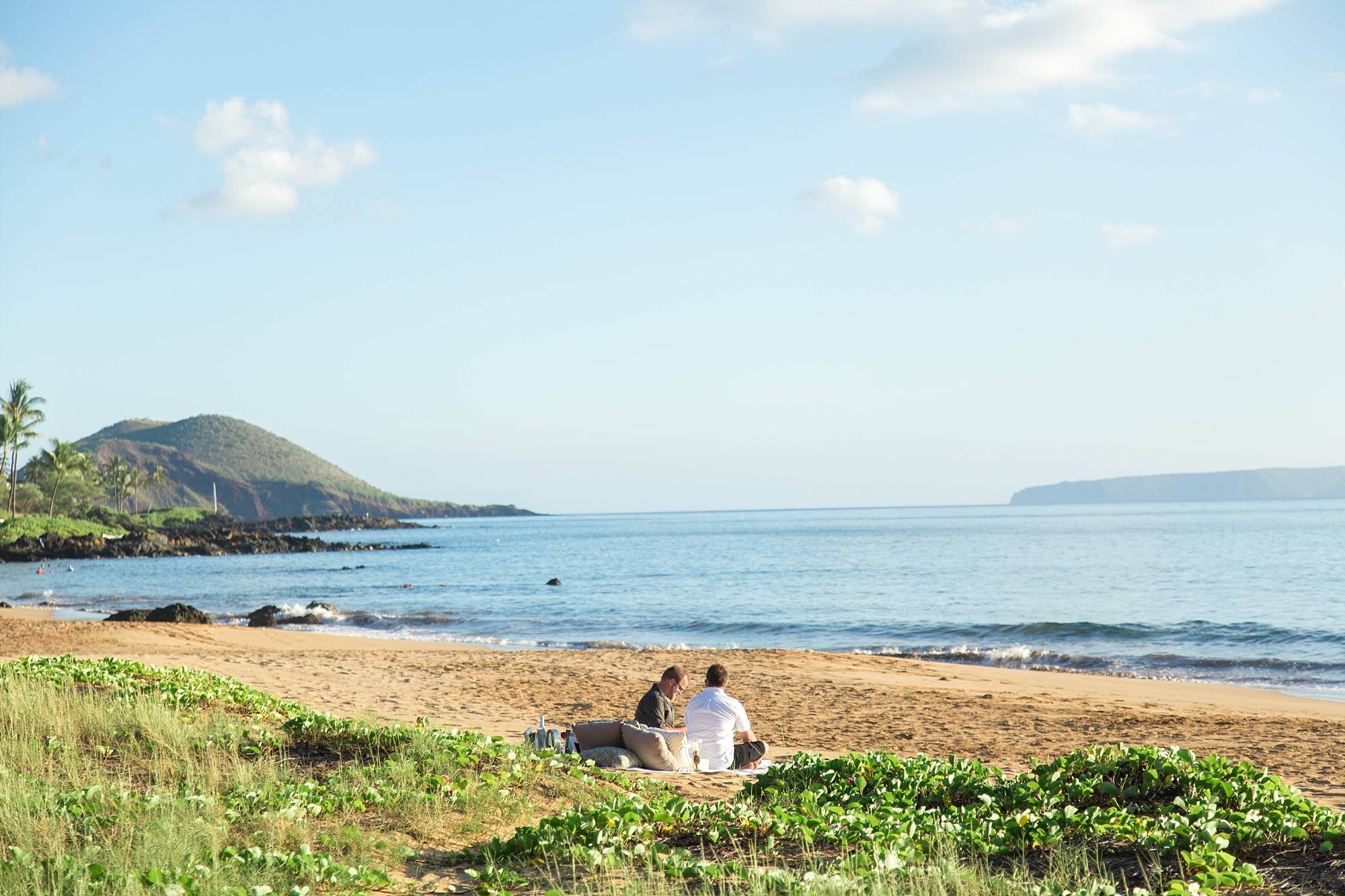 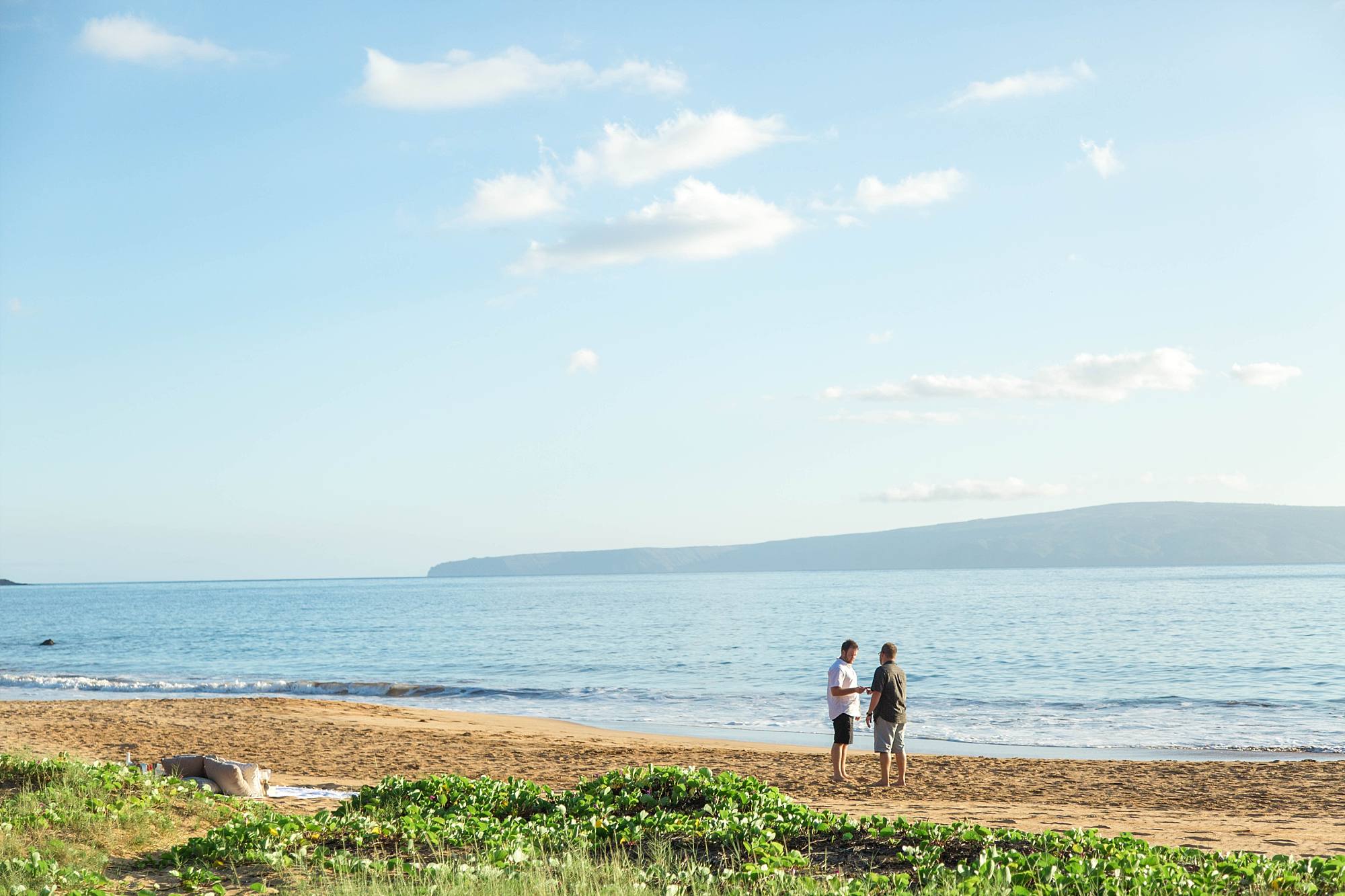 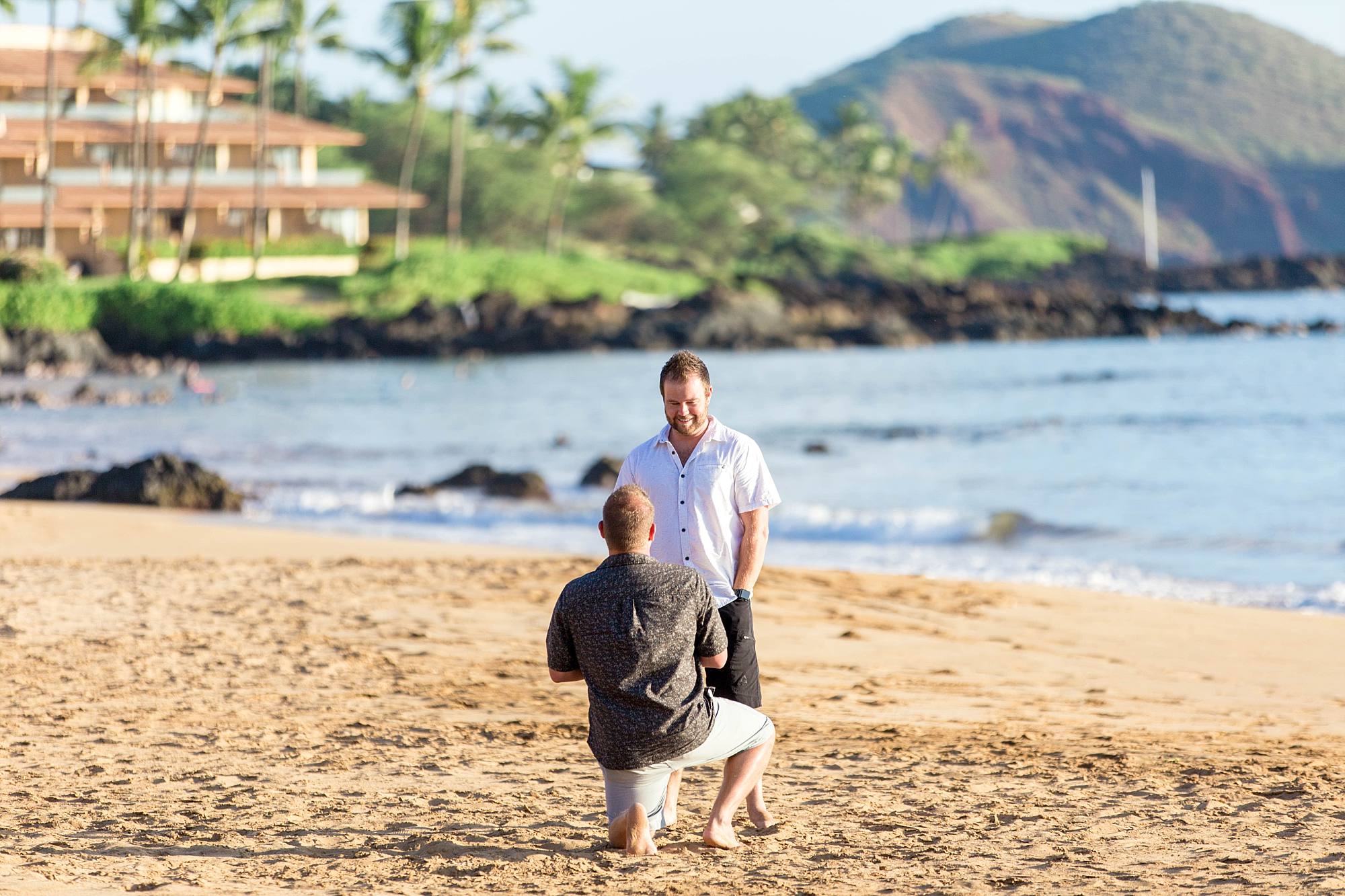 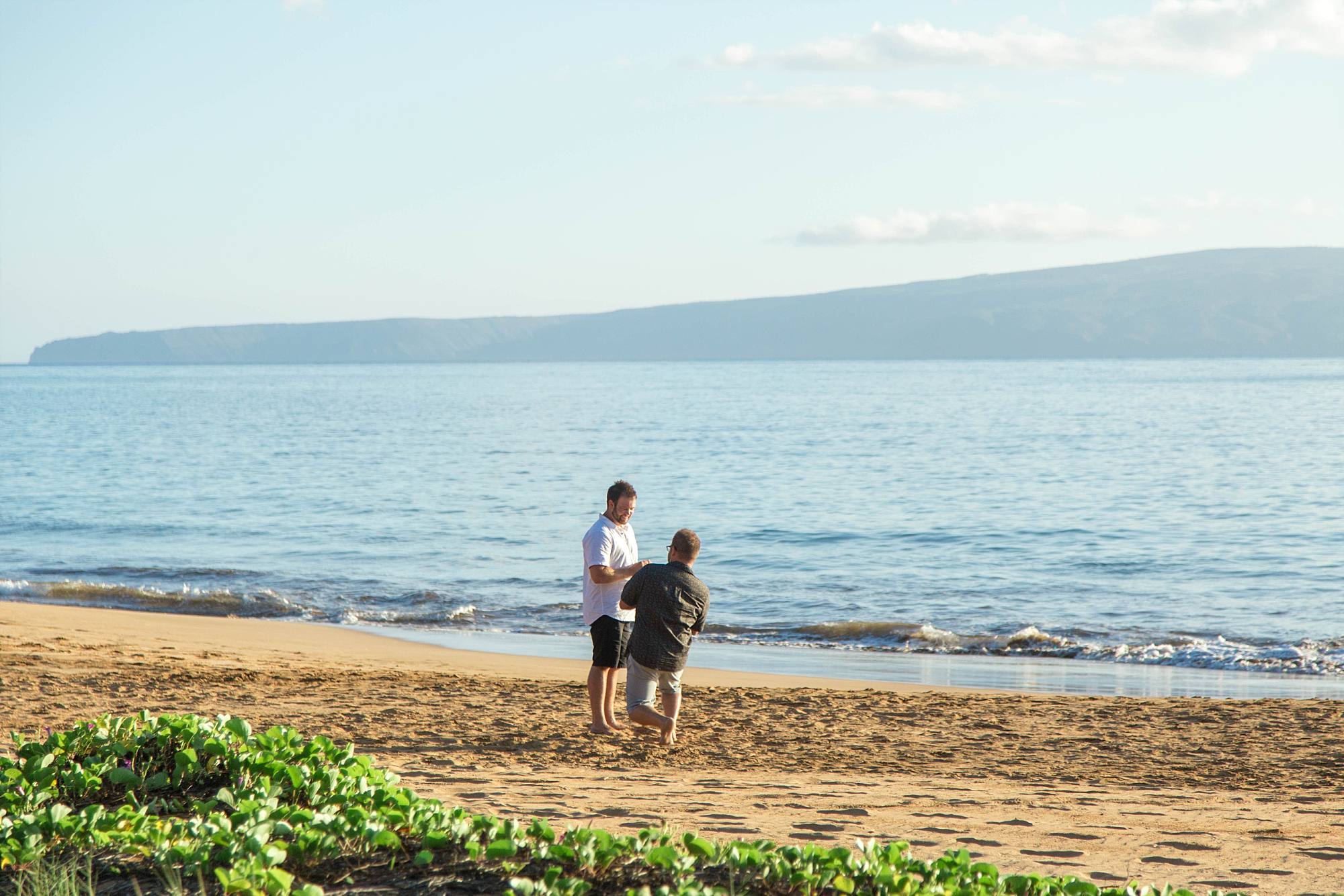 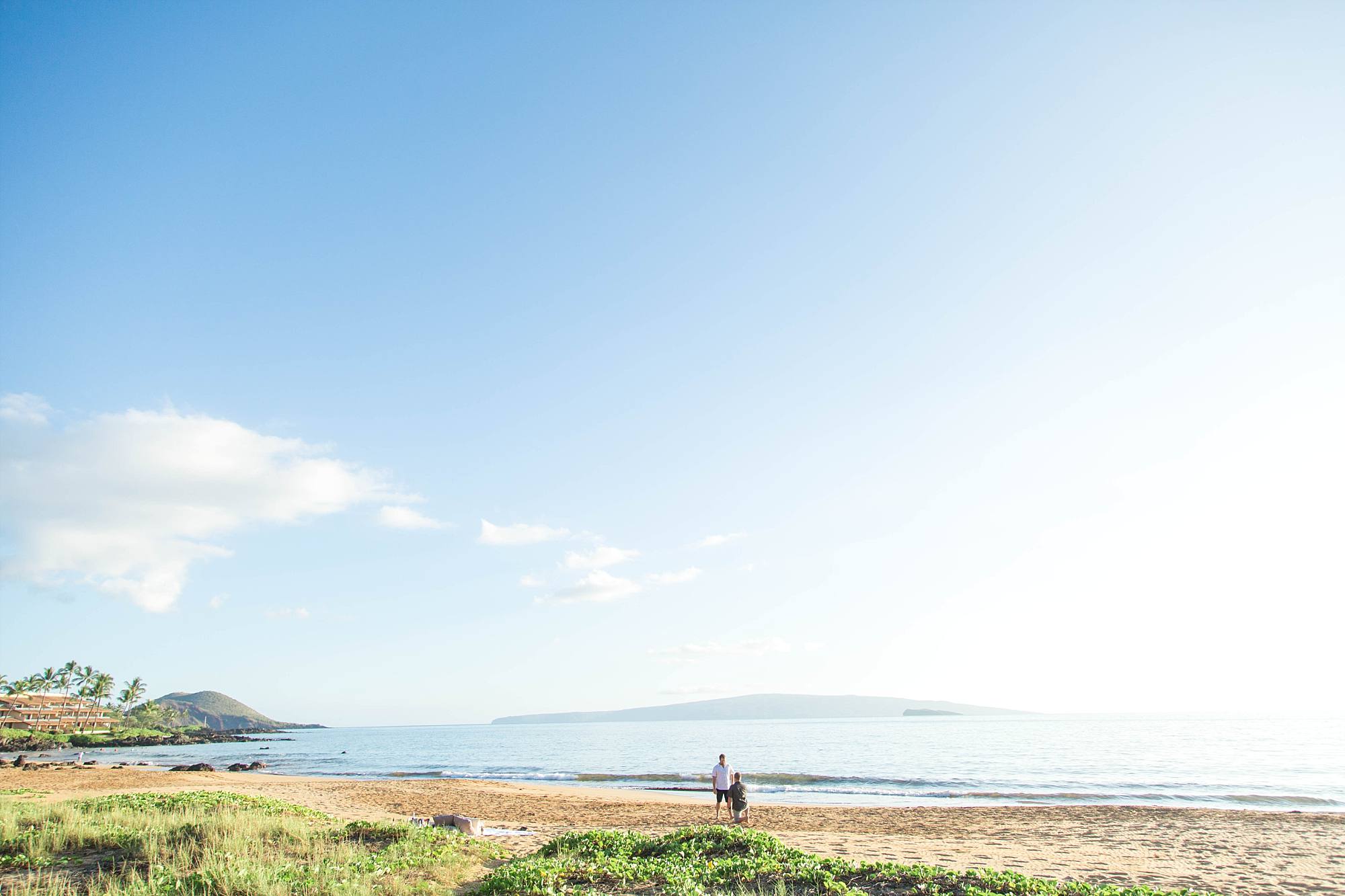 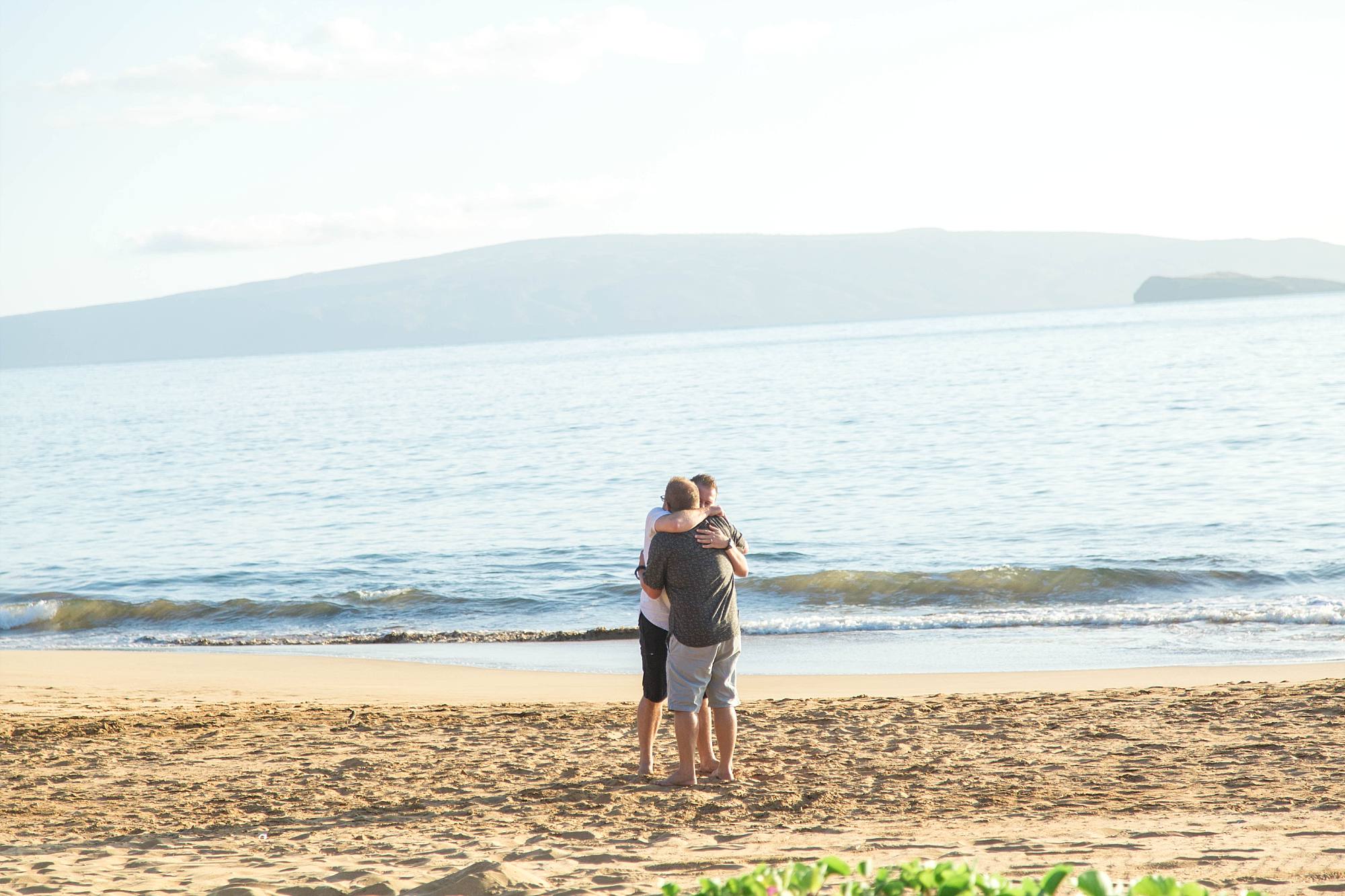 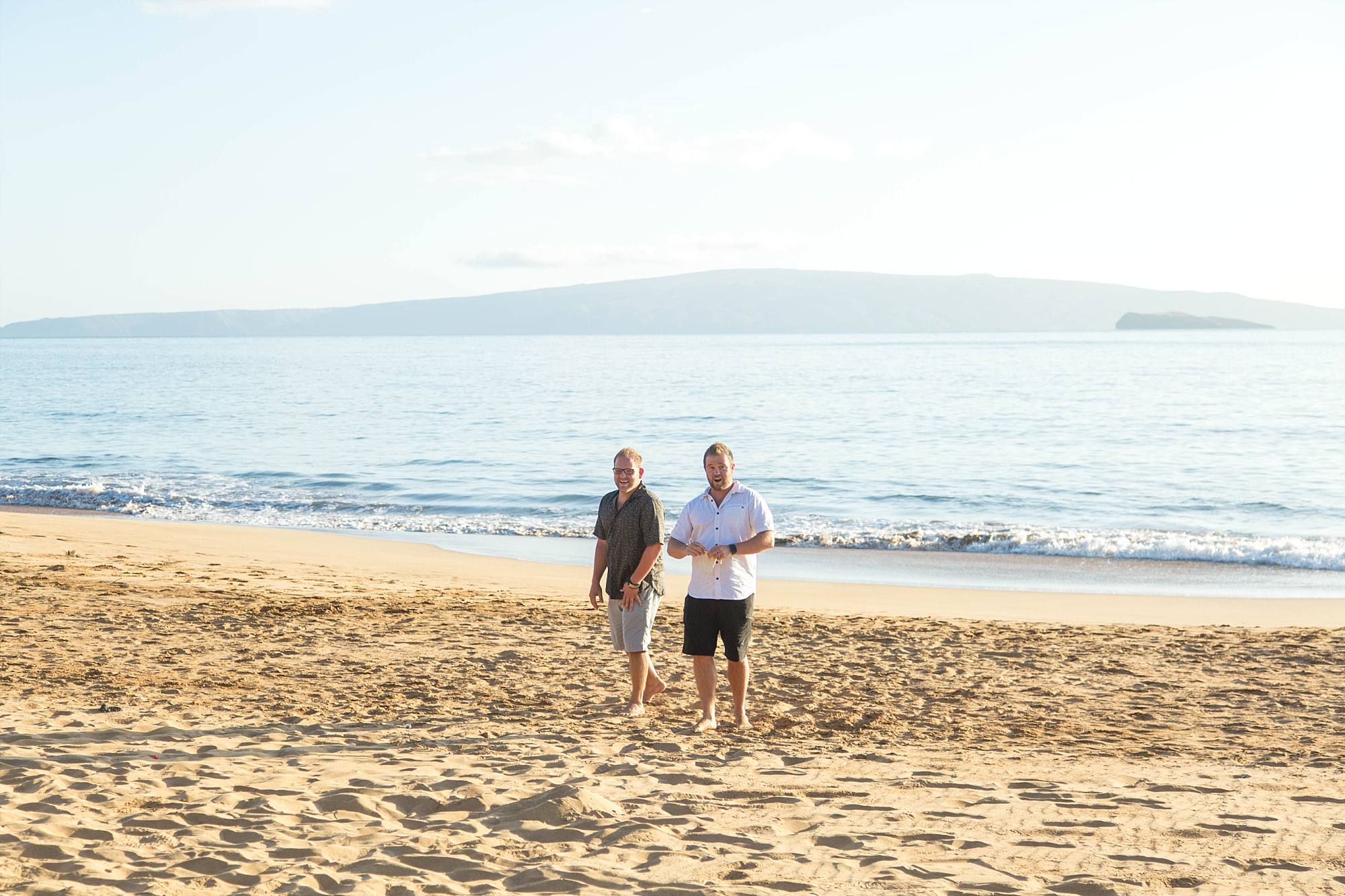 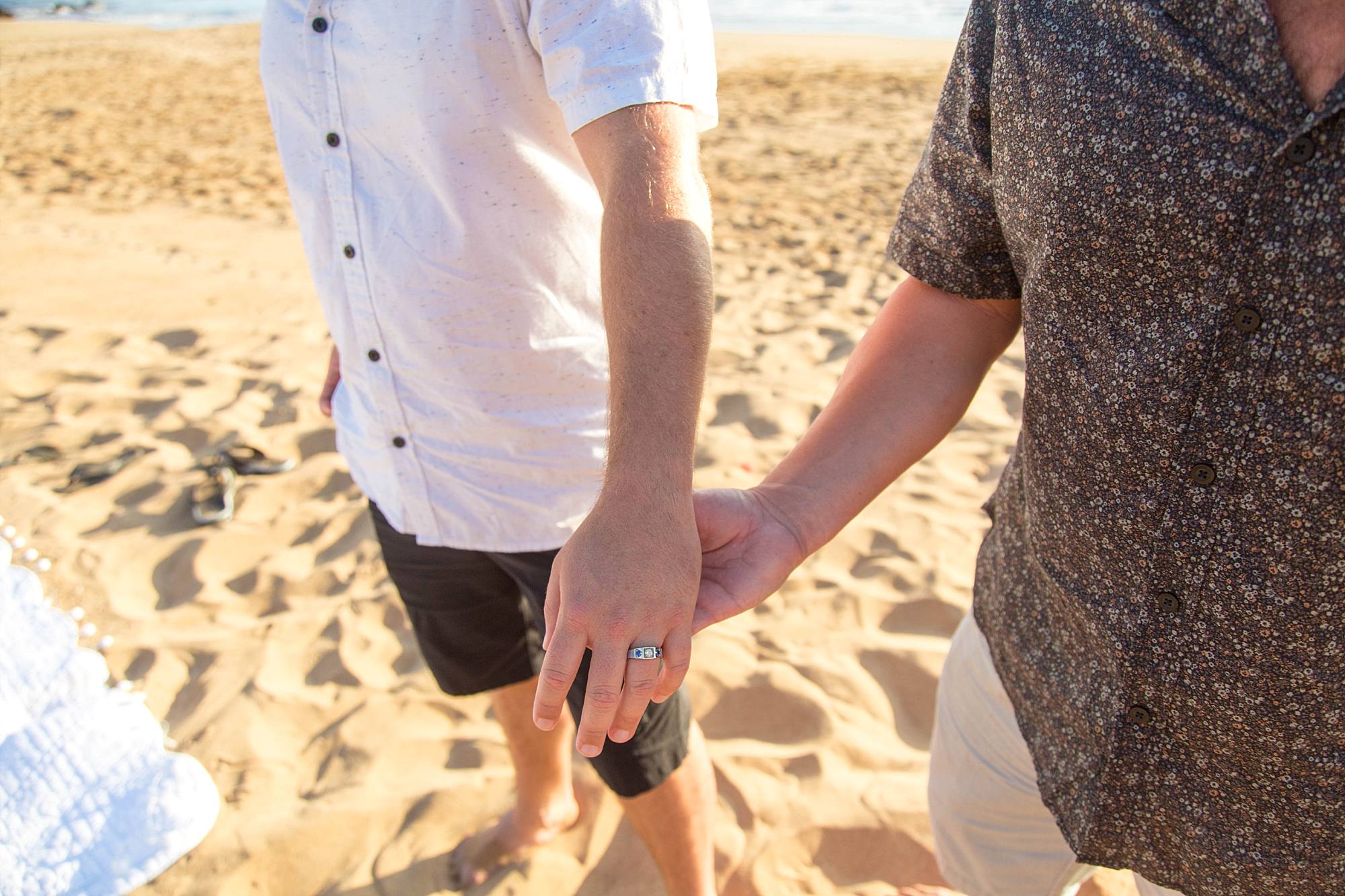 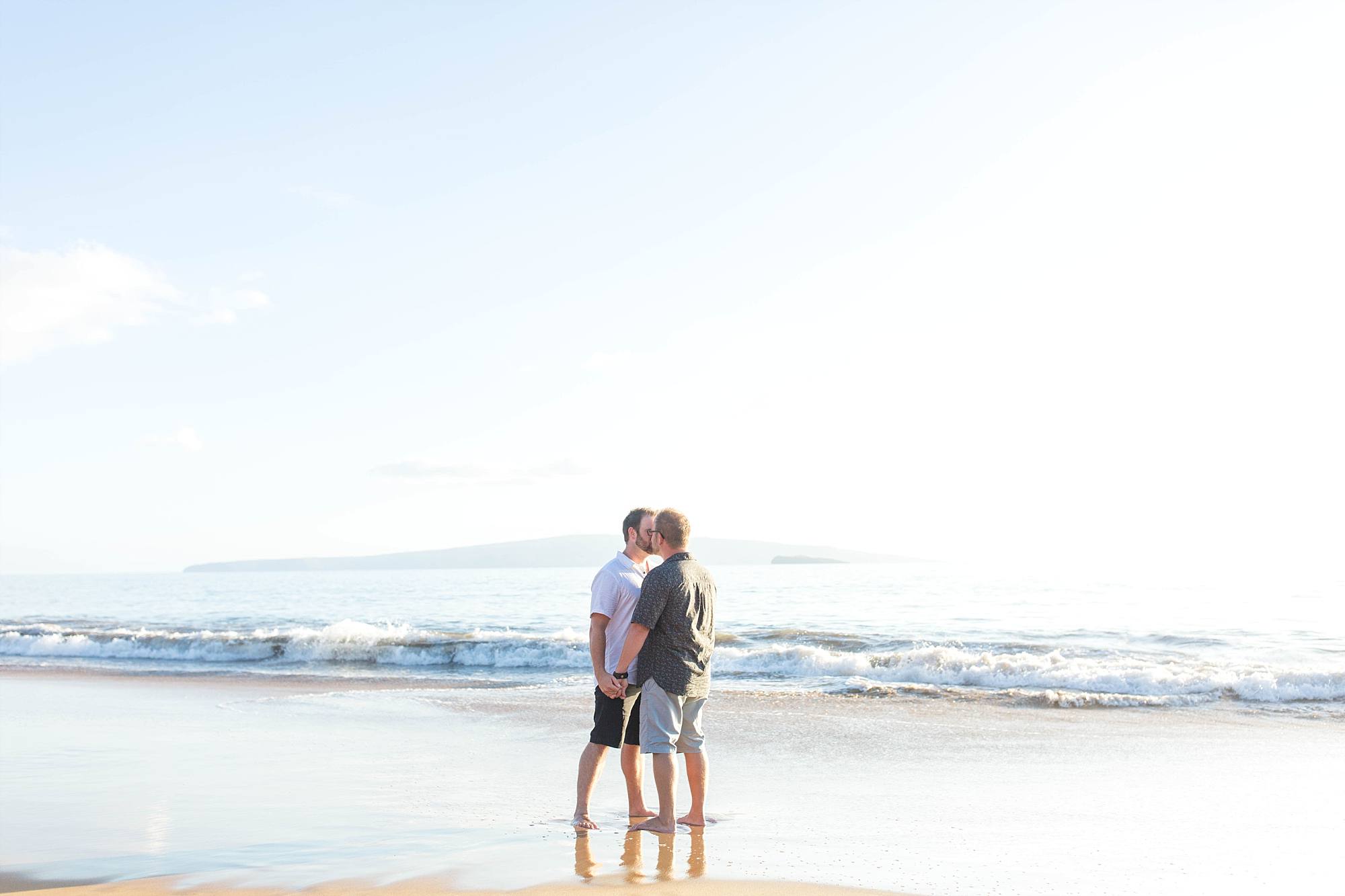 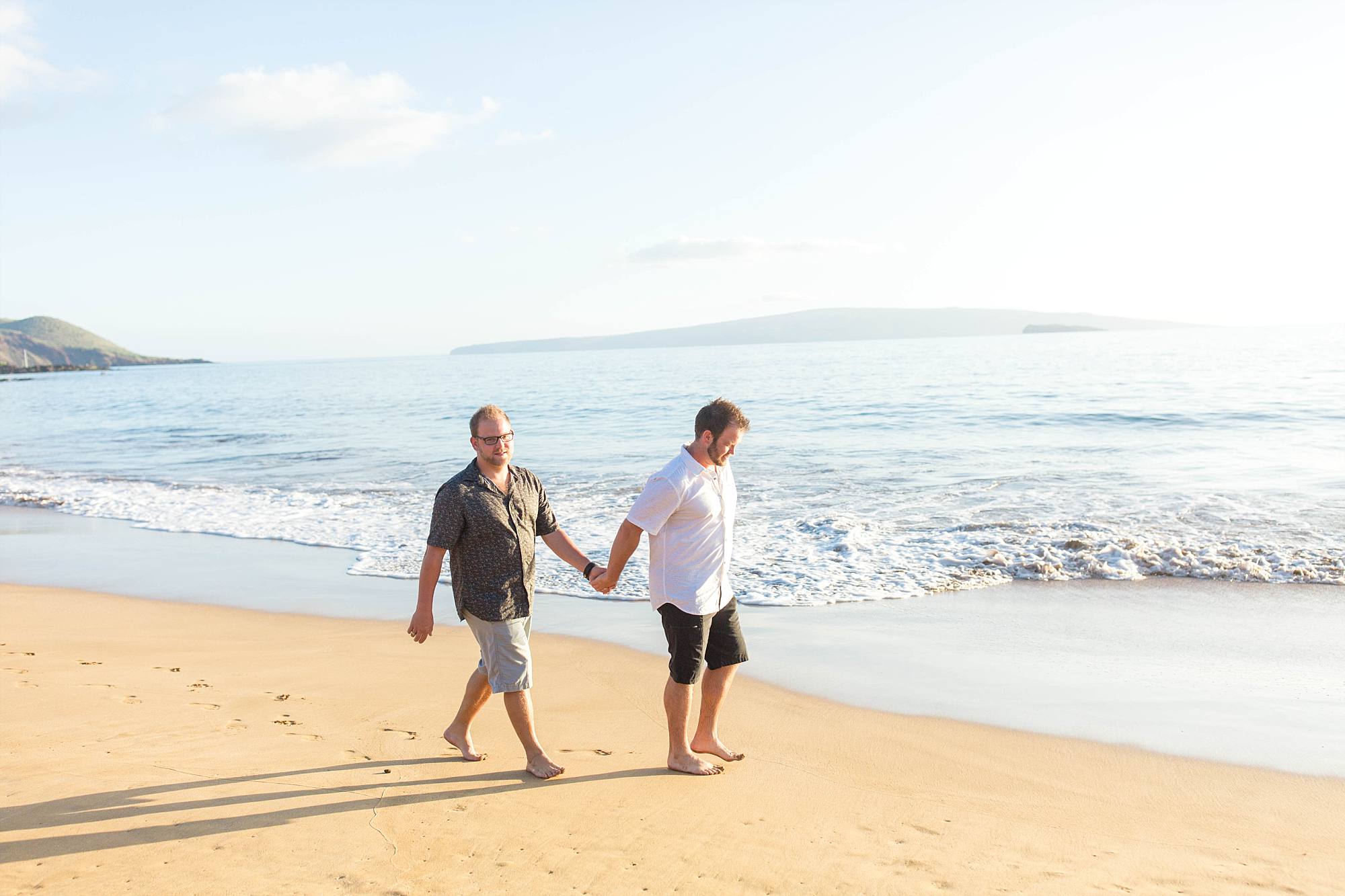 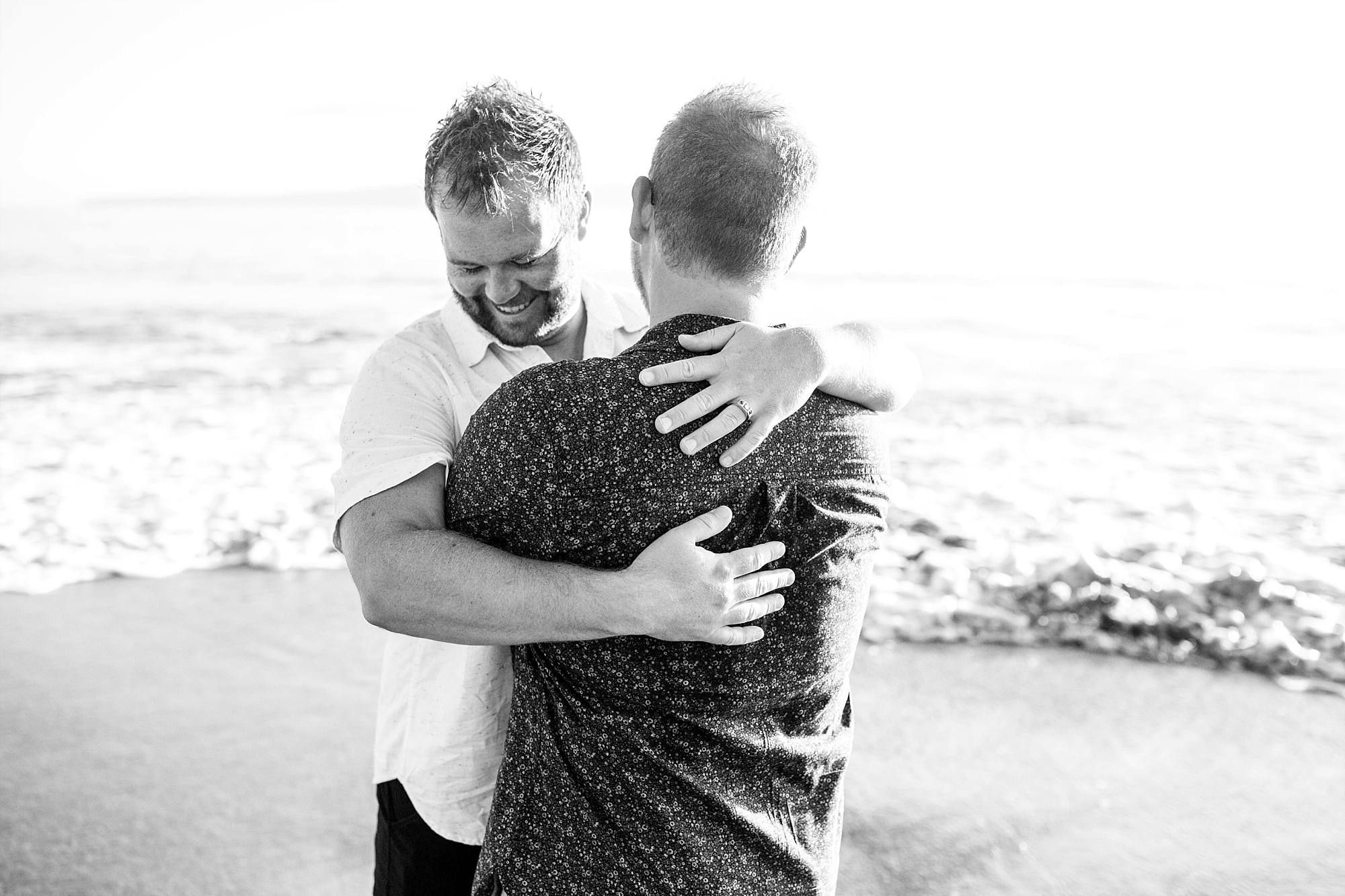 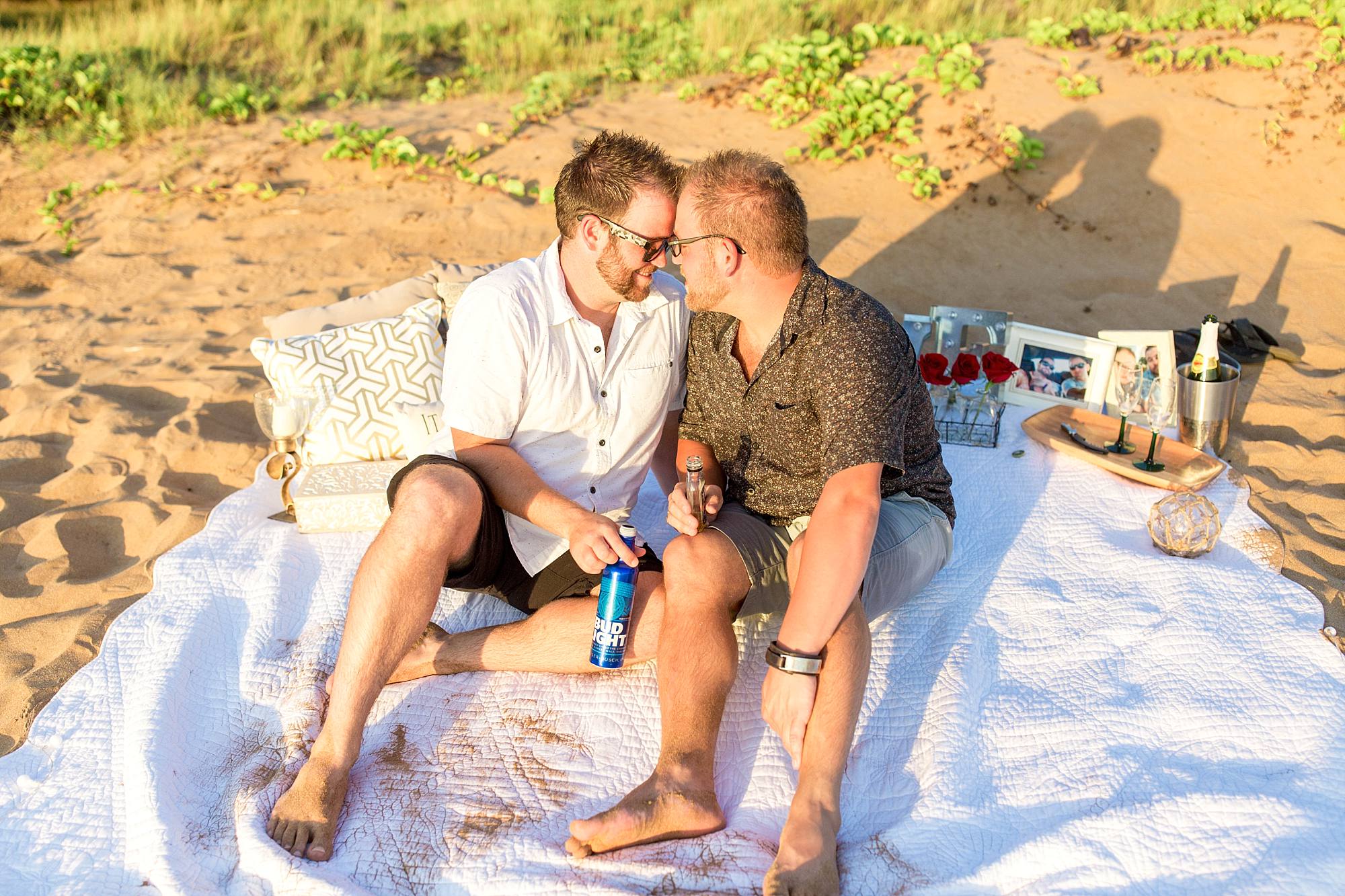 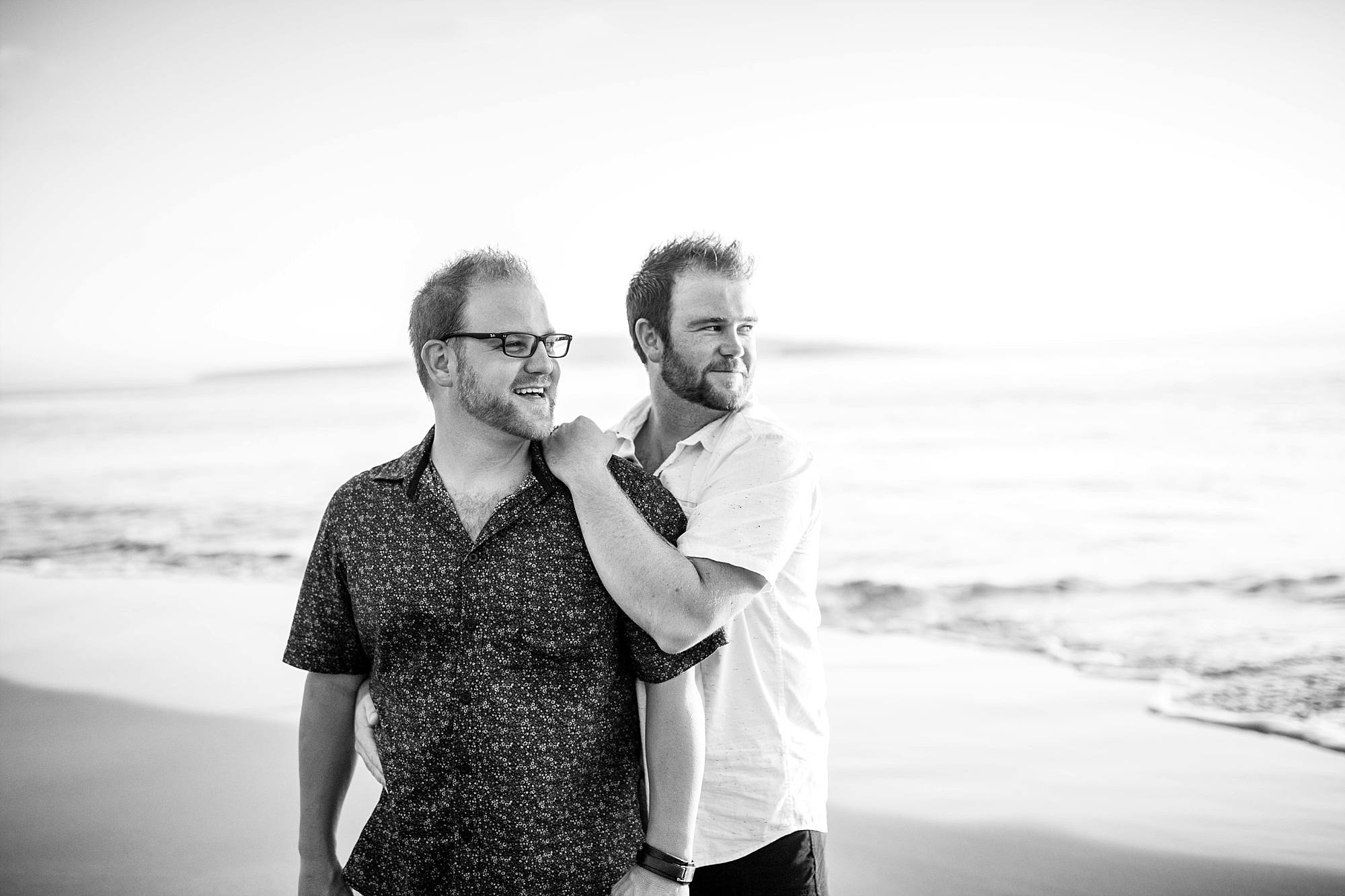 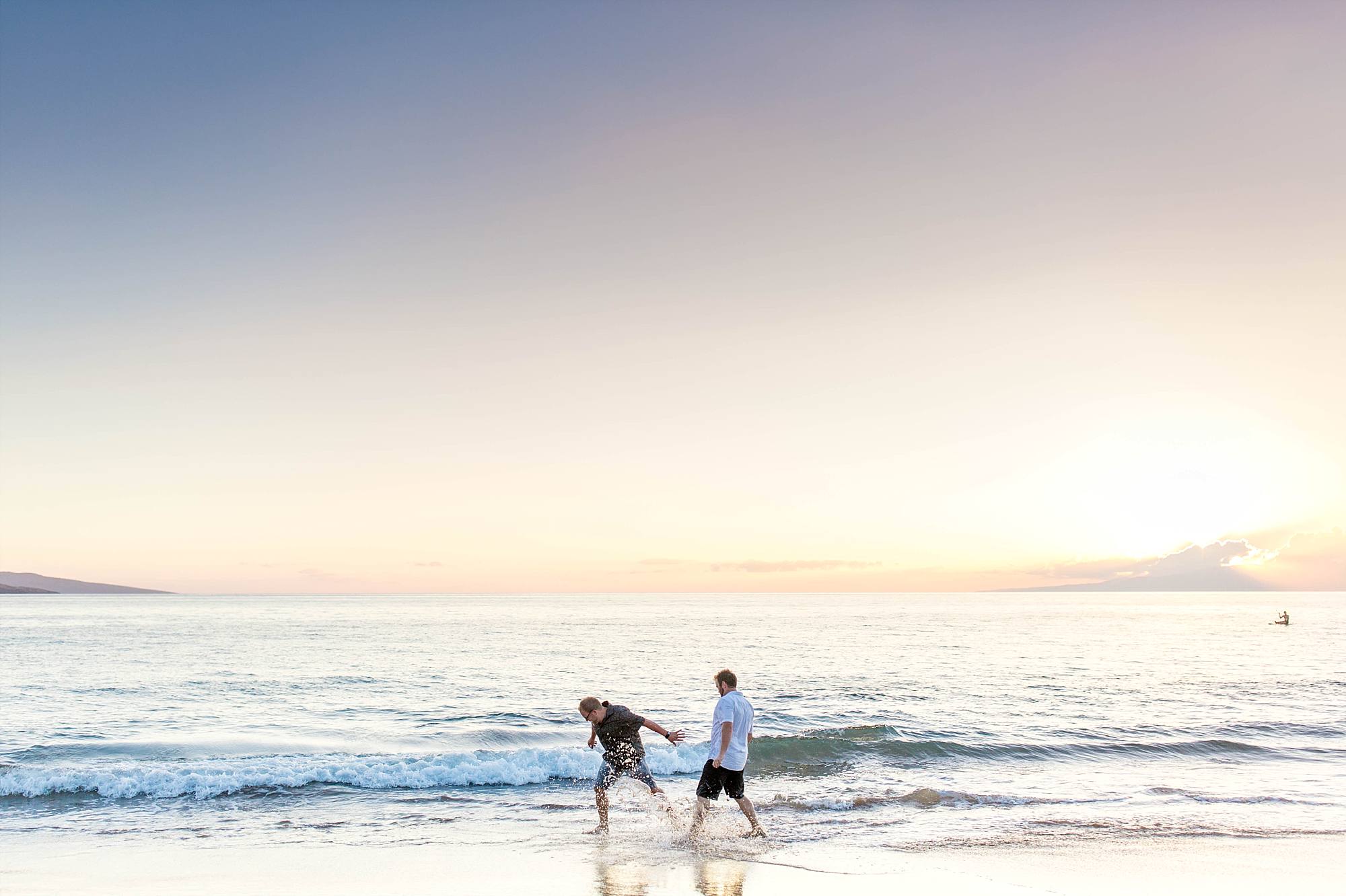 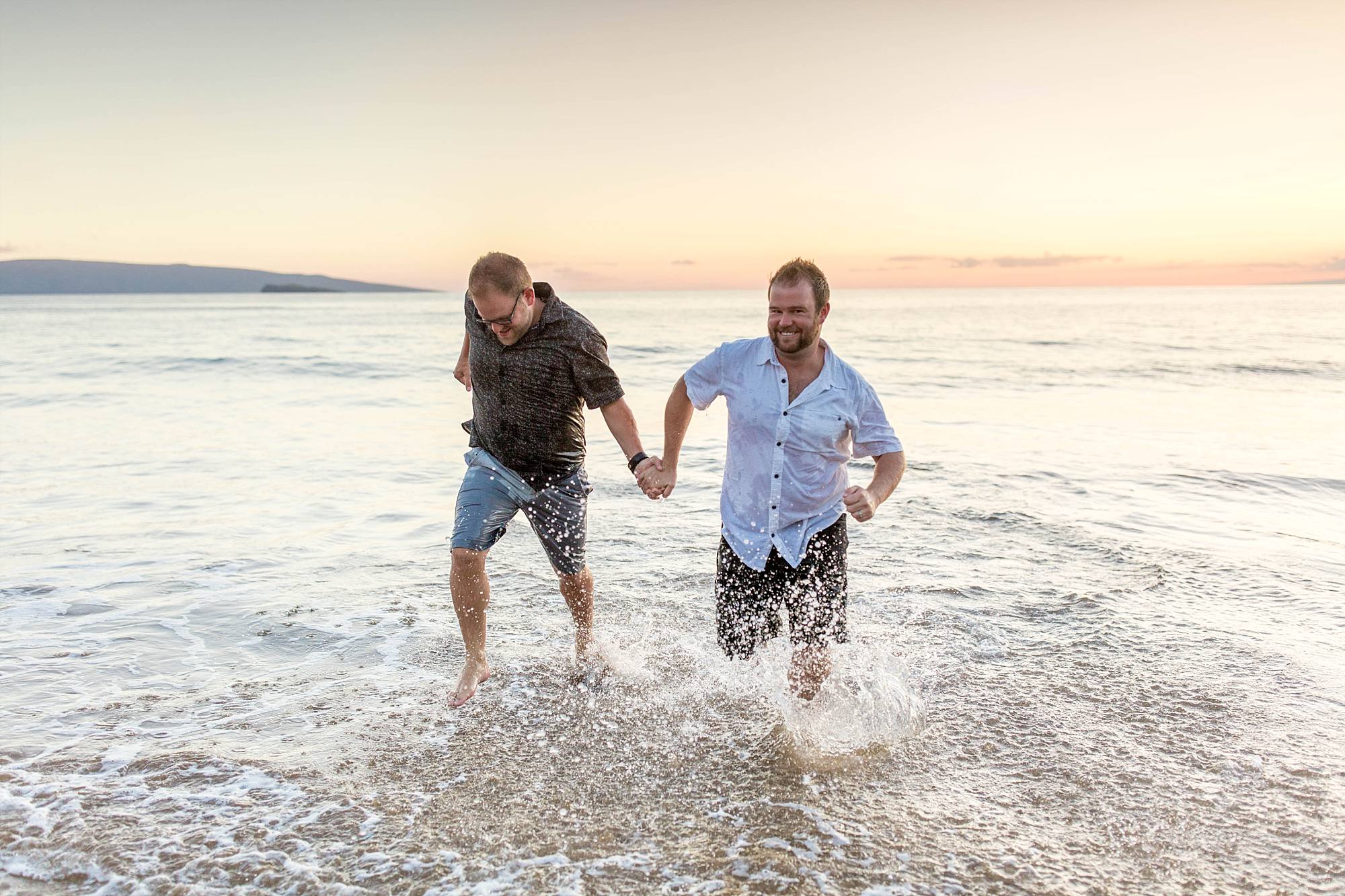 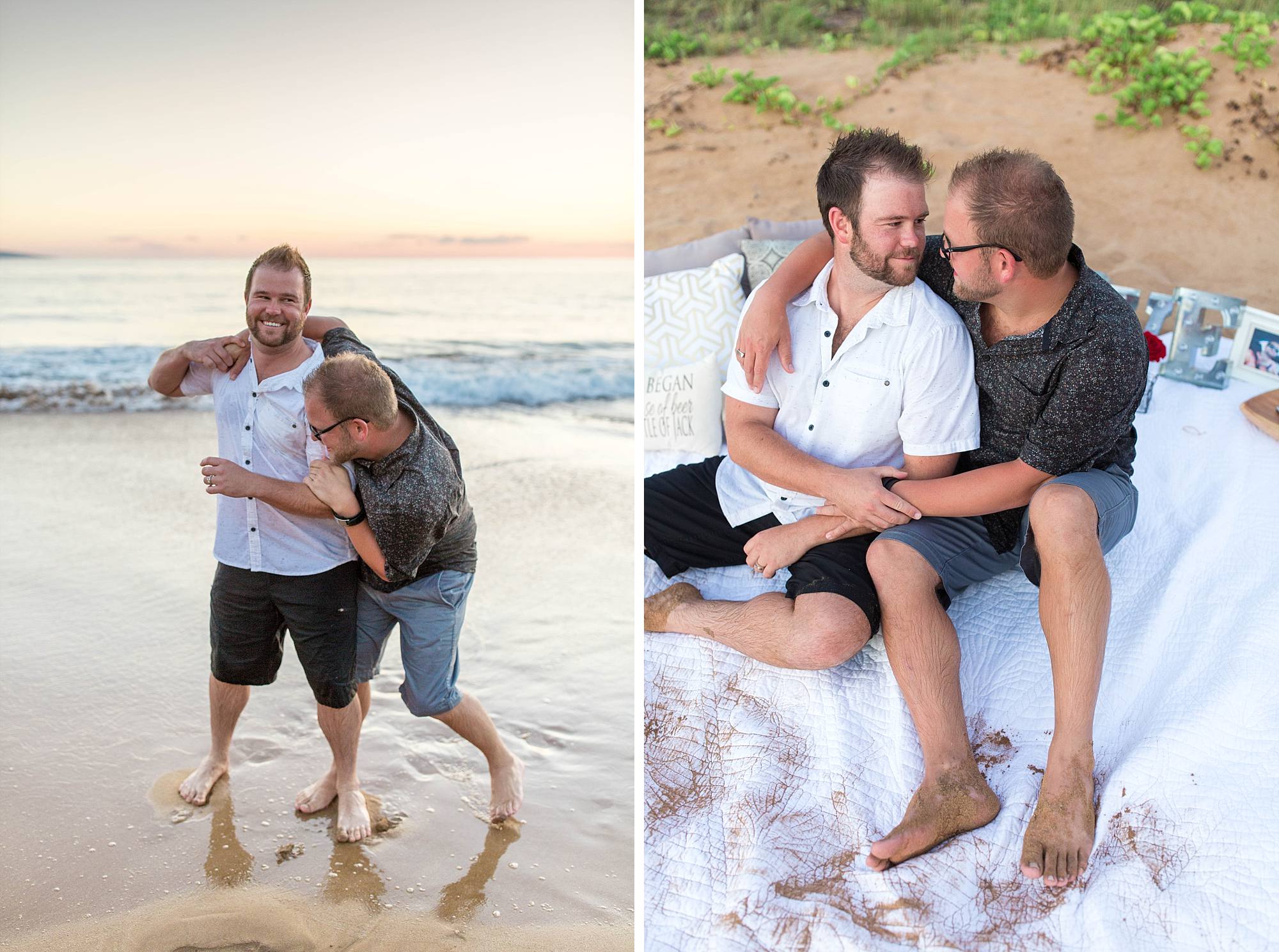 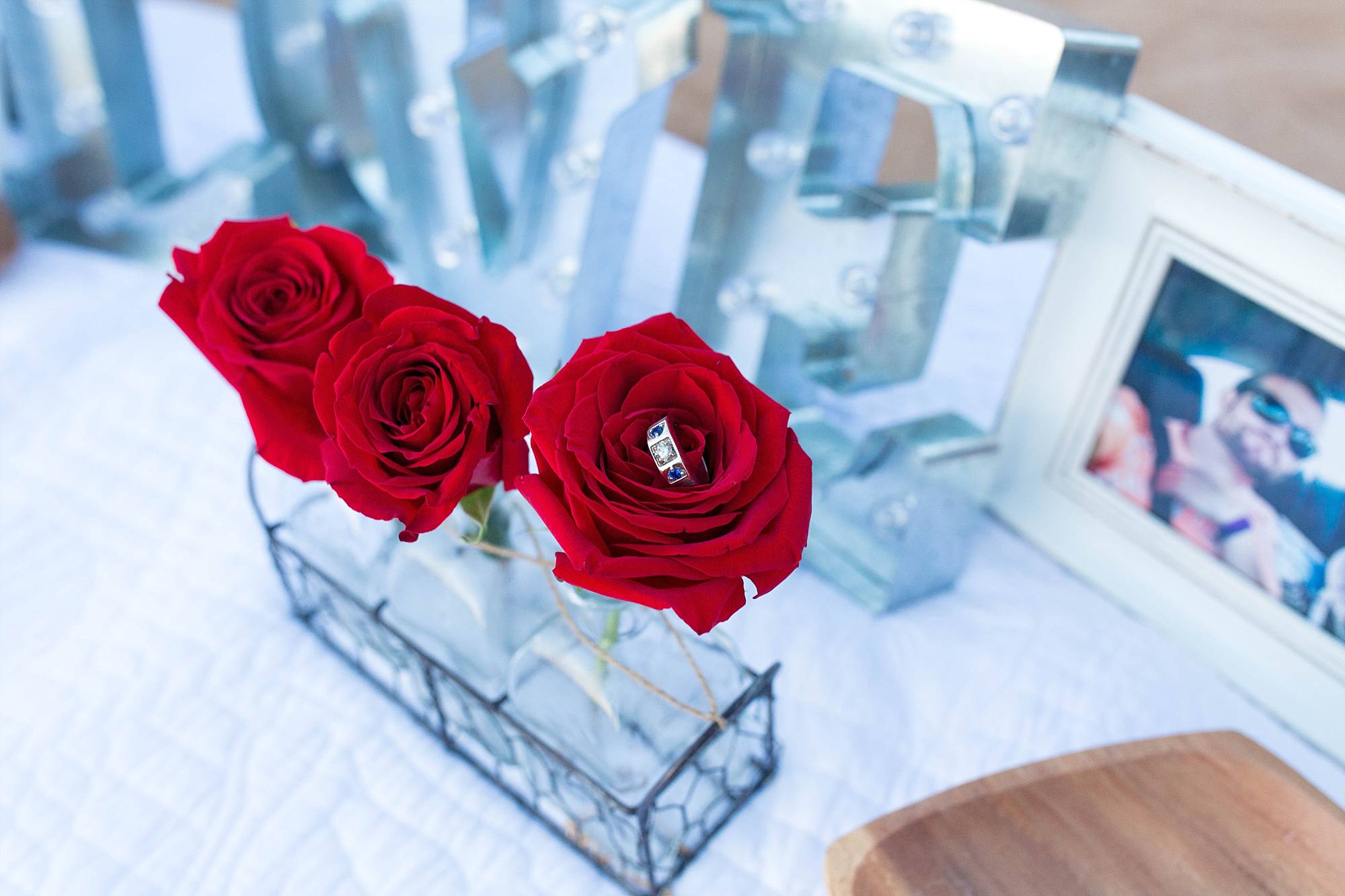 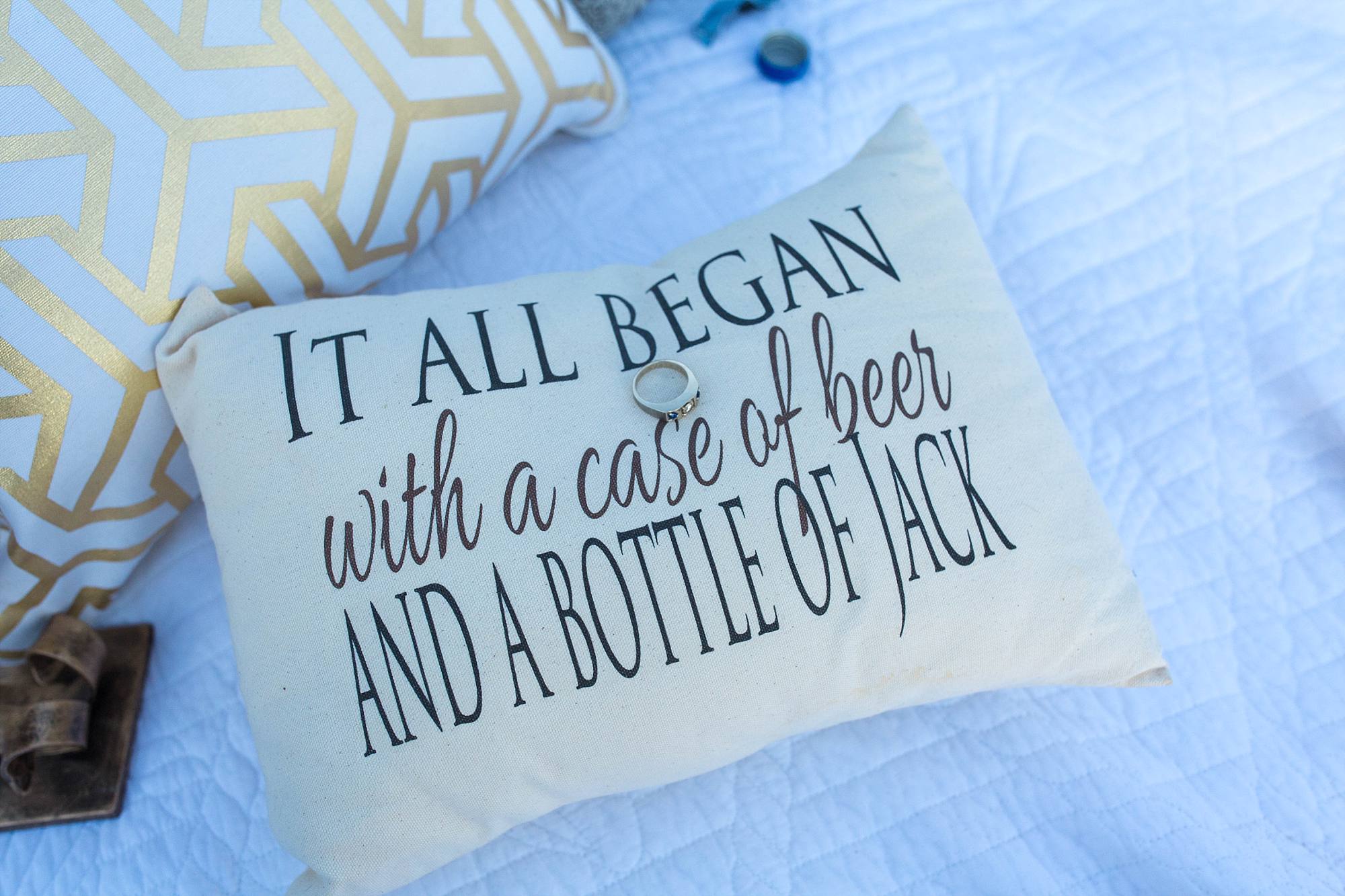 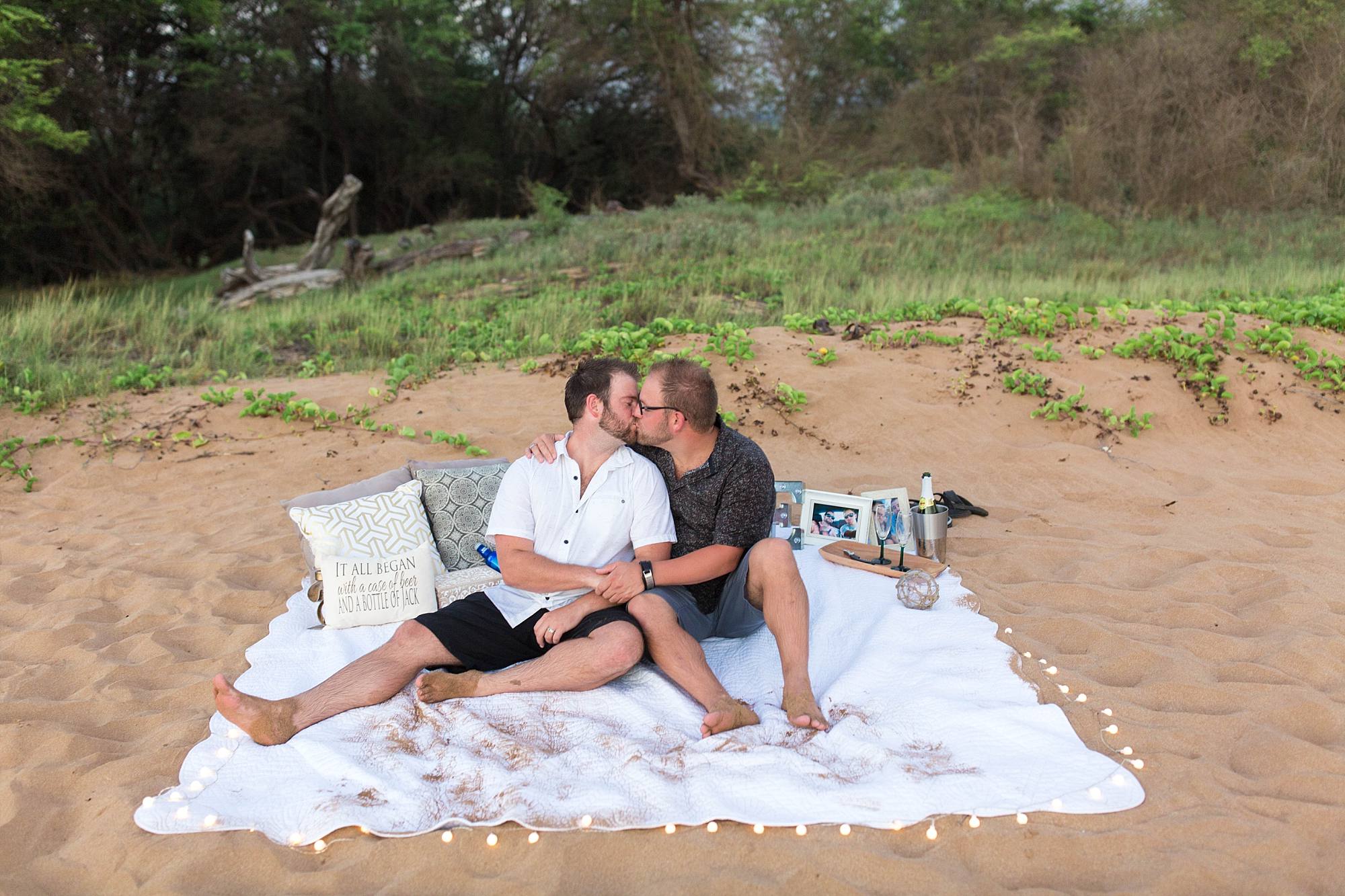 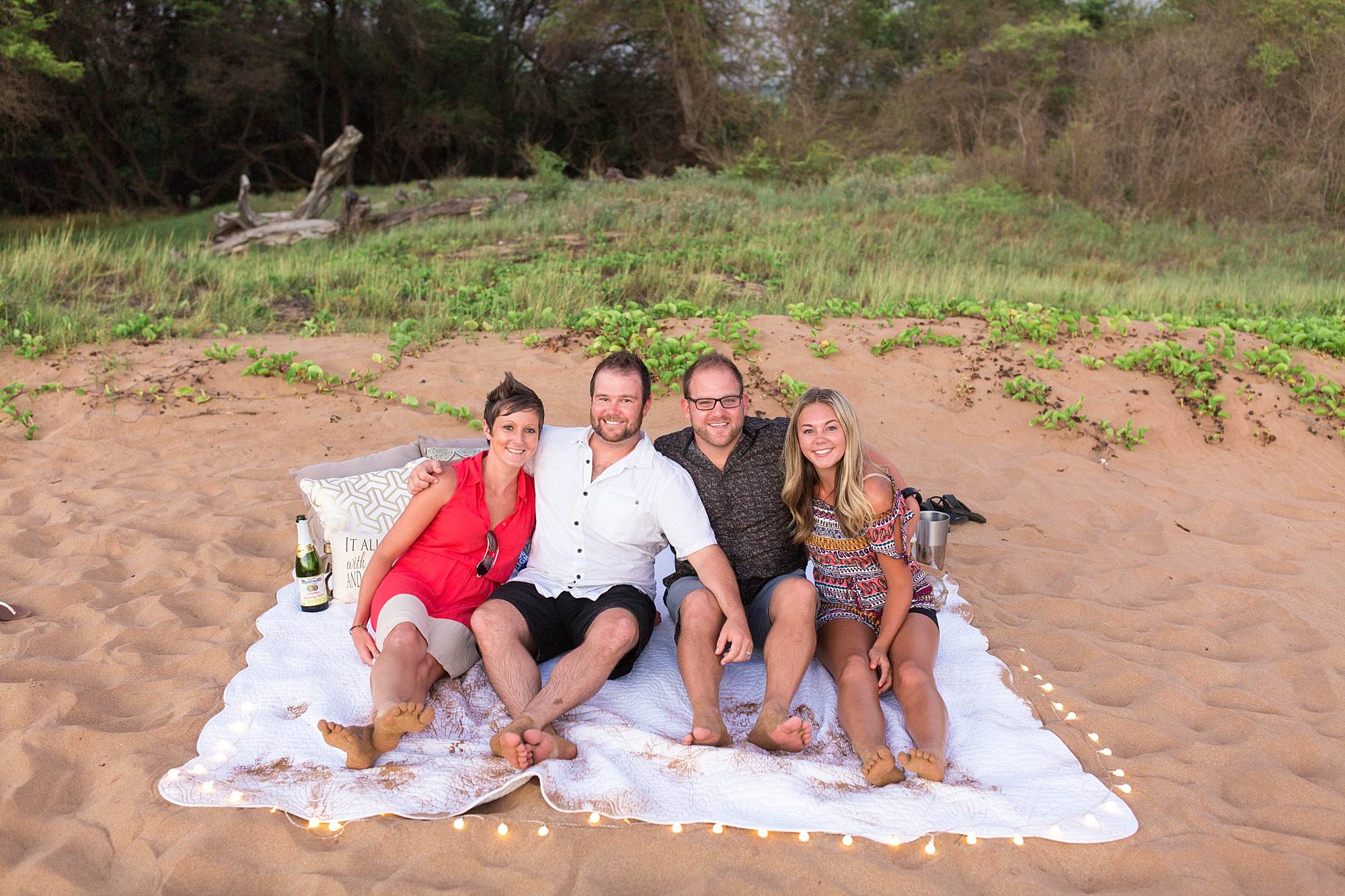 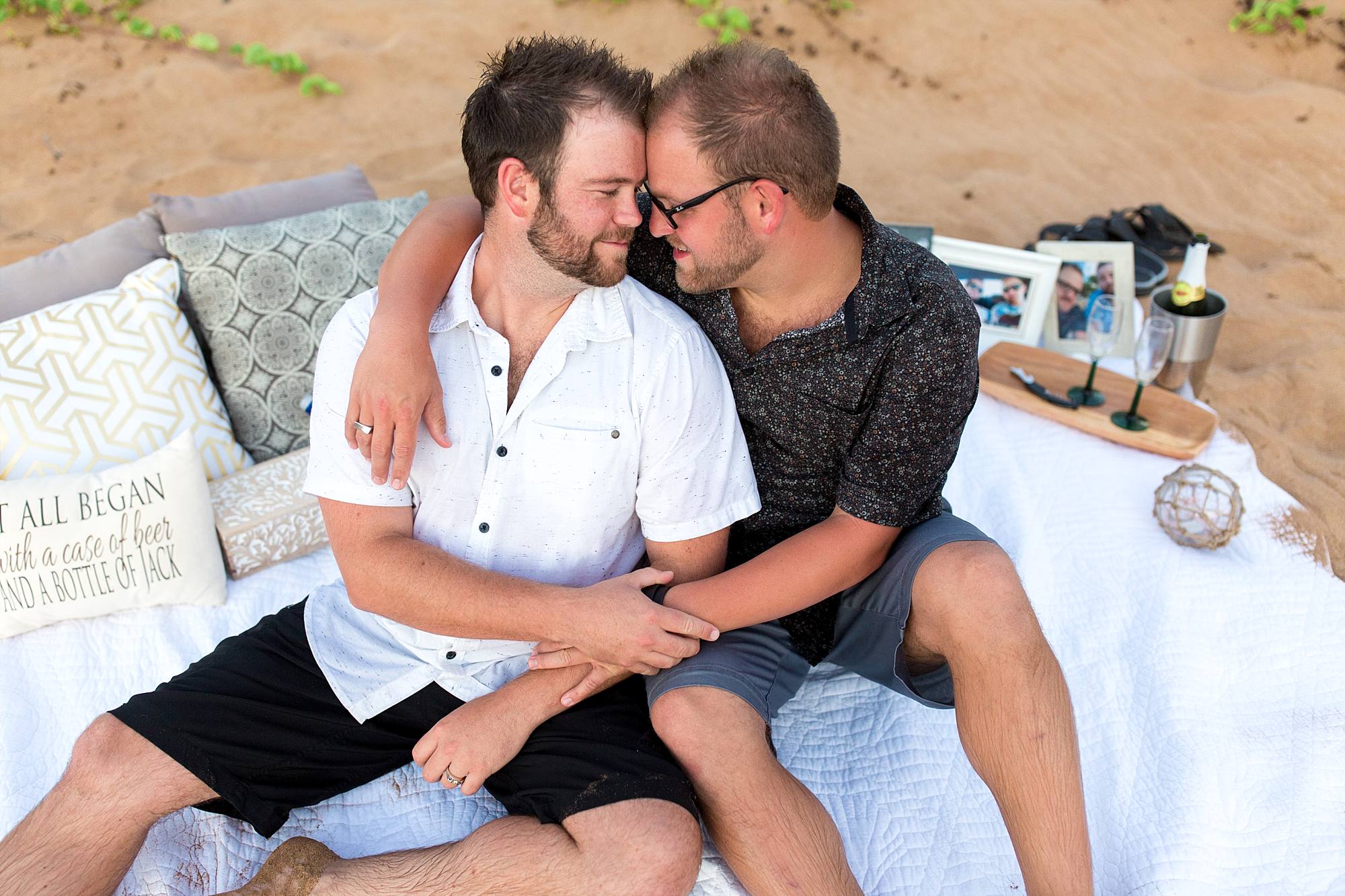 Colten and Braydon:  Thank you for choosing Engaged on Maui.  We were honored to photograph your same sex picnic proposal on Maui.  Cheers!

IS A BEACH PICNIC PROPOSAL ON MAUI WHAT YOU’RE LOOKING FOR?

Leaning towards a private proposal? Consider a pri

Happy Aloha Friday! 🤙🏼 Send this to your par

"You meet thousands of people and none of them rea

Let's talk weather! There is really no bad time to

Would you prefer to know that your proposal is goi

How about this for a unique engagement photo? 🌕

Akshay & Bindi met at a wedding almost 2 years ago

Haleakala National Park is a popular location for

"The best thing to hold onto in life is each other

Swipe to see the moment that Kelly noticed we phot